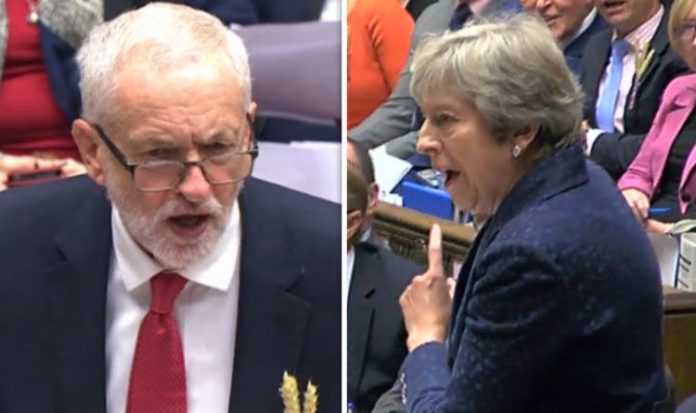 The heated debate was sparked when Mr Corbyn claimed Theresa May is “not challenging the burning injustices in our society”.

“On top of that there’s the flawed and failing universal credit – disabled people risked losing their homes and vital support. Children forced to use food banks and the Prime Minister wants to put two million more people onto this.

“Mr Speaker, the Prime Minister is not challenging the burning injustice in our society. She is pouring petrol on the crisis. She needs to stop inflicting misery on the people of this country.”

In response, Mrs May fired back and said: “The right honourable gentleman talks about challenging the burning injustices – that’s about setting up the racial disparity audit which says what do public services do and how to do people from different communities in our country, how are they treated by our public services?

“It means saying that nobody should be stopped and searched on our streets because of the colour of their skin. That was me as Home Secretary. Never, the Labour Party.”

The Commons roared as Mrs May added: “What we are doing is putting 3.3 million more people in jobs as a result of our balanced approach the economy.

“And what have we seen from Labour over the past few days? Iranian state TV broadcasting no confidence votes against Labour Members of Parliament. Police investigating anonymous and threatening letters about the deselection of Labour MPs sent to Labour offices.

“And most shamefully of all, the honourable member for Streatham saying that the Labour Party is now an institutionally racist party.

“If that’s what he has done to Labour then just think what he’d do to this country.”

Mr Umunna accepted his admission, following the furious row over anti-Semitism among party activists, was “very painful”. But he vowed to fight for change rather than “leave the field”.

He made his blunt claim on Sky’s Sophy Ridge on Sunday after the head of the Equalities and Human Rights Commission concluded Labour was “led by anti-Semites and racists”.

He said: “If you look at the definition of institutional racism, as outlined in the Macpherson report… The Labour party, it’s beyond doubt for me that it has met it. It’s very painful for me to say that.”

He said: “Calling anybody a dog is absolutely outrageous in the extreme.”