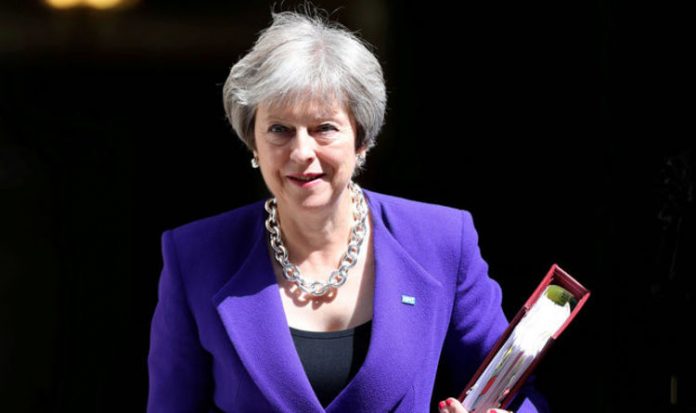 Letters are being lodged with Graham Brady, Chairman of the influential 1922 Committee, ahead of a Tory Party showdown on Monday.

Leave MPs are furious at what they see as Mrs May’s caving in to demands from the Remain wing of the party to steer Britain towards a soft Brexit.

On Sunday, ITV’s Robert Peston tweeted: “Sources confirm letter calling for vote of confidence in @theresa_may leadership going in to @Graham_Brady, chair of 1922.

“This appears to be spontaneous, not corralled by ERG [European Research Groupo] & @Jacob_Rees_Mogg.”

Mrs May has been bracing herself for a backlash following her latest Brexit fudge.

The Prime Minister is set to address all 316 Tory MPs on Monday, but rebels would need 48 MPs to try launch a challenge.

If 48 letters are received by Mr Brady, Mrs May would be forced to stand down and fight a leadership contest.

However, Mrs May is said to be confident of facing down rebels plotting to oust her.

It is reported that Eurosceptics are circulating a draft statement urging Mrs May to quit.

Mr Brady is believed to be six letters short of the required number of letters to trigger a vote, according to the Sunday Mirror.

Among the frontrunners in any potential leadership challenge could be Mr Rees-Mog, who has slammed the Cabinet’s 12-point blueprint.

Meanwhile, Environment Secretary Michael Gove has called on Tory MPs to back their leader.

Mr Gove, a prominent Brexiteer, said: “Those of us who believe that we want to execute a proper Brexit, and one that is the best deal for Britain, have an opportunity now to get behind the prime minister in order to negotiate that deal.”

At Friday’s Chequers showdown, Mrs May was boosted by support from arch-Brexiteers such as Mr Gove.

On Thursday, Foreign Secretary Boris Johnson was talked out of resigning by former PM David Cameron, who convinced Mr Jonhnson to stay on.

During Friday’s summit, Mrs May restored cabinet collective responsibility as she bolstered her grip on rebellious Eurosceptics in her Cabinet.

Ministers speaking out against her ‘soft-Brexit strategy’ now face the sack.