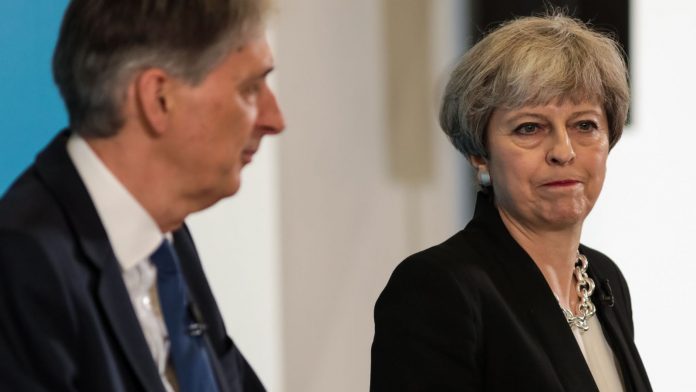 Theresa May delivered a rebuke to her chancellor as she arrives in Africa for her first visit to the continent as prime minister.

When asked whether she thought her chancellor was right in his assessment of the economic impact of “no deal” – as outlined in a letter to the Treasury Select Committee last week, the PM refused to endorse Philip Hammond’s position, stating that the figures he quoted were out of date.

“First of all, the chancellor was talking about a set of figures that I think came out in January.

“I think when they came out I was very clear on a previous trip that those figures were a work in progress at that particular time.”

Her failure to back Hammond and his prognosis for no deal will be cheered on the Brexiteer wing of the party.

A senior government source privately indicated frustration with Number 11 and confusion as to why the Chancellor decided to publish his letter when he did.

The prime minister also cited the Director of the WTO on the impact of no deal, repeating his words that it “would not be a walk in the park” but that “It would not be the end of the world.”

She also repeated her claim that she would rather take Britain out of the EU with no deal, rather than accede to one not of her liking: “I’ve said right from the beginning that no deal is better than a bad deal.

“I think its absolutely that the government is preparing for no deal because we don’t know what the outcome is going to be but I believe what we’ve set out in the white paper is a deal that benefits both sides.”

That comes despite warnings from her own government’s no deal preparation documents, released last week, that a no deal scenario would necessitate stockpiling of blood, medicine and food as well as charges on credit cards for consumers, extra bureaucracy for business and potential chaos in the pensions and insurance industries.

When asked whether she thought the UK would miss the deadline of the October EU Council summit, she replied: “Well we’re still working hard to make sure we get that good deal and we get that good deal within the timetable and that enables us to leave on the 29th March 2019 with that deal.”

The prime minister has landed in Cape Town as she hopes to make Britain the biggest G7 investor in Africa by 2022.

Mrs May’s trip is designed to demonstrate that Britain will increasingly look to new emerging markets after Brexit.

She will visit South Africa, Nigeria and Kenya in a five-day programme of meetings with political and business figures in all three countries.

There is a feeling within government that the UK has neglected its Africa ties at a prime ministerial level in recent years – no prime minister has visited sub-Saharan Africa on a working visit since 2011 and she will be the first prime minister to visit Kenya since Margaret Thatcher in the 1980s.

Nonetheless, given most of the countries involved already trade with the EU on a preferential basis, there is worry in African government and business that if the UK leaves without a deal, then that preferential access to the UK (a big market for African goods) could be disrupted.