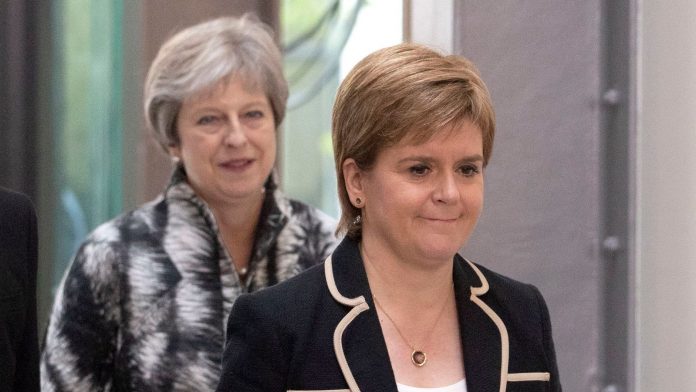 Theresa May has said the Scottish government should get behind her Brexit proposals, following talks with First Minister Nicola Sturgeon.

The prime minister said Scotland should not try to “sow the politics of division”.

Mrs May insisted all parts of the United Kingdom should support the deal, which was agreed by the cabinet.

The SNP leader said after talks with Mrs May she still has concerns Britain could be forced to quit the EU without a formal deal.

Ms Sturgeon said afterwards: “My concern about the increasing prospect of a no deal Brexit certainly wasn’t allayed in that meeting.

:: Women may have to quit jobs to fill care roles post-Brexit, report warns

“We discussed obviously the position around the Chequers agreement. The prime minister’s position continues to be that she thinks Chequers is the basis of an agreement on the future relationship, notwithstanding that everybody else thinks that it’s not.”

The Scottish government has repeatedly called for the UK to remain in both the European single market and the customs union after leaving the EU.

It has previously refused to back the European Withdrawal Bill, instead passing its own Brexit contingency legislation.

The Supreme Court is currently considering a Westminster challenge to this.

Mrs May said the government was “working to get a good deal for the whole of the United Kingdom”.

“I think it is incumbent on all parts of the United Kingdom to be supporting the proposals that we’re putting forward in their interaction with Brussels,” she said.

“I think it important we see those proposals being supported, rather than sadly what I fear we see here which is an attempt to sow the politics of division.

“We’re working to get a good deal, we’ve put forward a proposal that delivers on the Brexit vote, that protects jobs and livelihoods here in the UK, that will be good for all parts of the United Kingdom, that ensures we have that clear good trading relationship in the future with the European Union, and that delivers on other issues people want.”

Asked if she would accept any request from the Scottish government to hold a second independence referendum, Mrs May said the focus should be on delivering for the UK.

“The Scottish people voted in 2014, they had a referendum, they gave a clear decision they wanted Scotland to remain part of the United Kingdom,” she said.

“I believe what we should be doing now is working and getting on with the job of delivering on the future of the United Kingdom, that’s about Brexit, it is about getting a good Brexit deal, it is about all the other issues like the industrial strategy, like the city deals,” she added.

She spoke after formally signing the £1.3bn city deal for Edinburgh and the south east of Scotland with the First Minister.

The agreement brings together the two governments, councils, universities and business.