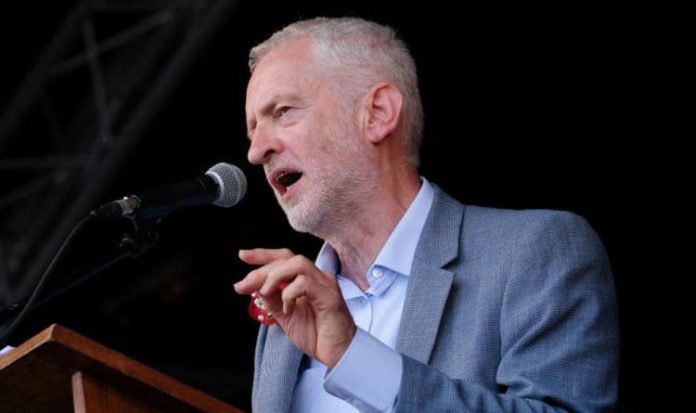 The Labour leader is currently resisting attempts to incorporate the full International Holocaust Remembrance Alliance’s definition of anti-Semitism in party rules because it includes not questioning Israel’s right to exist.

Now historic footage has emerged of him  apparently questioning the right of Israel to exist and claiming that newspaper’s supporting it was evidence of bias in the media.

Footage from an interview with Iranian Press TV was tweeted on Tuesday by political blogger the Golem, as Labour’s anti-Semitism conflict continues.

The Golem tweeted: “Remember that time @JeremyCorbyn appeared on PressTV and said that the Israeli government and Israeli embassy are “very assertive towards all journalists and the BBC” and as proof of this said “there is a bias towards saying . . . Israel has a right to exist”. No? Here you go…”

The claims follow revelations of Mr Corbyn chairing a meeting seven years ago where Israel was compared by another speaker to the Nazis and a Holocaust survivor was forced to leave for protesting against the hard Left diatribe.

Reacting, Jewish Leadership Council chief executive Simon Johnson attacked the comments as being at odds with Labour’s policy on Israel.

He said: “Sorry Mr Corbyn. Do you therefore think that Israel is NOT a democracy, does NOT have a right to exist and does NOT have security concerns?

“And that an organisation is biased if it DOES believe these things?

“Wow. That seems to differ somewhat from the policy of the party you lead.”

The Jewish Chronicle reported how Mr Corbyn claimed the BBC was biased towards Israel during the interview with the INFocus programme in May 2011.

In the interview, Mr Corbyn said: “There is pressure on the BBC from [former director general] Mark Thomson, who seems to me to have an agenda in this respect.

“There seems to be a great deal of pressure on the BBC from the Israeli government and the Israeli embassy and they are very assertive towards all journalists and the BBC itself.

“They challenge every single thing on reporting the whole time.

“I think there is a bias towards saying that Israel is a democracy in the Middle East, Israel has a right to exist, Israel has its security concerns.”

A Labour spokesman defended Mr Corbyn, saying the remarks were taken out of context and the Labour leader supported a two-state solution.

He said: “Jeremy was arguing that, despite the occupation of Palestinian territory and the lack of a Palestinian state, Israeli concerns and perspectives are more likely to appear prominently in news reporting than Palestinian ones.

“Jeremy is committed to a comprehensive peace in the Middle East based on a two-state solution – a secure Israel alongside a secure and viable state of Palestine.”