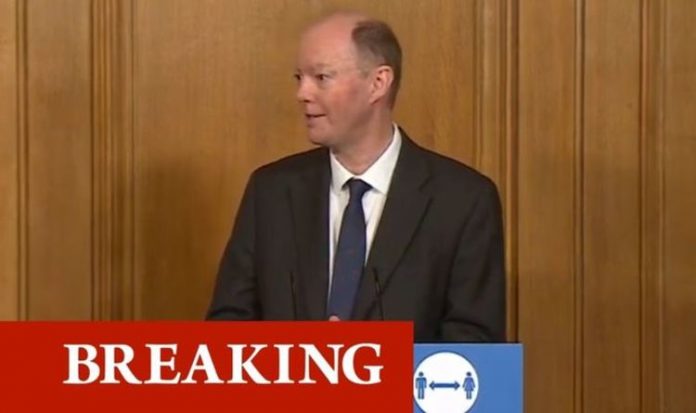 At a Downing Street press conference about the details of the new strain of the pathogen, Chris Whitty said: “I have to say in my own view, this is not my worst moment in the epidemic. The reason for that is although this virus is more transmittable. And we must do everything we can – which the Prime Minister has announced to keep it down as much as possible.”

Professor Whitty added: “We do have medical countermeasures. We do have a vaccine being rolled out.

“There is a prospect, in the medium-term future, where things could be quite a lot better.”

The speed of transmission of the new variant is its most dangerous aspect detected so far and Prime Minister Boris Johnson said there was no evidence as yet that it would have a resistance to the current coronavirus vaccines.

Professor Whitty said that in London alone the majority of new coronavirus infections were revealed to be made up of the new variant.

He said that new data showed the new variant was the cause of “62 percent” of new cases.

“In the east of England, the new variant comprised of 59 percent of new cases.”

These numbers have gone up very fast in the last few weeks.

There has been an increase in hospitalisation rates from people suffering from coronavirus in areas were the new variant is more prevalent.

Professor Whitty said: “In the east of England hospitalisations have increased by 36 percent and in London by 34 percent.”

Mr Whitty has announced the rates of infections from the new variant in the north of England is much lower.