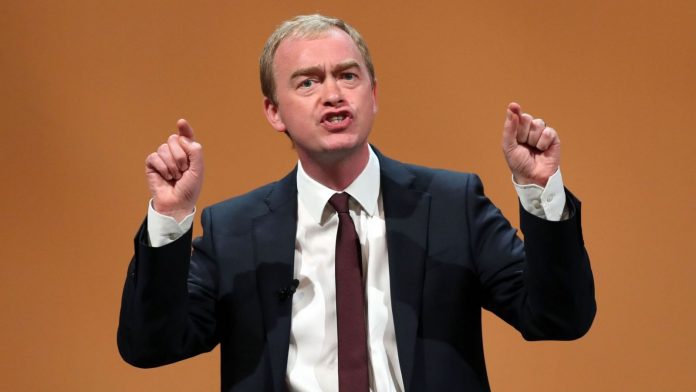 Pro-EU Conservative and Labour MPs have been told to “grow a flipping backbone” and set up a new party.

In a blunt intervention in the Brexit debate, Tim Farron said the Liberal Democrats would not join the new centrist party but would “work with them”.

The former Lib Dem leader said people should not fall into the “trap” of thinking such a venture was doomed to fail, pointing to the positive poll numbers the SDP, Britain’s last big breakaway centrist party, had at its height in the 1980s.

He said the SDP, which was formed by four Labour MPs in 1981 and later entered into an alliance with the then Liberal Party, had come “very close to having made it”.

Mr Farron told Playbook, Politico’s morning newsletter: “Let some of these people in the Labour Party and the Tory Party grow a flipping backbone and leave.

“And we should work with them.

“Let them form their own party, we will work with them, and we’ll try and do it together.

“People shouldn’t fall into the mistake of thinking the SDP was a failure. It really wasn’t.

“The day before [former Argentine president Leopoldo] Galtieri invaded the Falklands, they (SDP) were on 51% in the polls and the [Liberal/SDP] alliance got 26% of the vote in ’83 – very, very close to having made it.”

The 1982 conflict between Britain and Argentina was seen as a turning point in Margaret Thatcher’s premiership, with Britain’s first female prime minister winning an increased majority off the back of her handling of the war.

Failing the formation of a new centrist party, Mr Farron said he would be content with a “decent electable leader” of the Labour Party.

He said: “I’m at the stage now … I’d be content for my children’s future if the Labour Party just sorted its act out, got a decent electable leader and gave the country an alternative.”

Mr Farron quit as leader in the wake of the 2017 general election, a vote that saw the pro-EU Lib Dems place a distant third behind the Conservatives and Labour.

Both Theresa May and Jeremy Corbyn stood on manifestos that pledged to honour the result of the 2016 EU referendum and deliver Brexit, with their parties garnering more than 80% of the vote combined.

Given this, there has been speculation pro-EU MPs unhappy with the direction their parties are headed could decide to break away and form their own.

Despite talk of a potential new party, Mr Farron said he still believed there was a place for the Lib Dems in British politics.

He said: “You see with great frustration – and I’m sure Vince [Cable, the current leader] feels the same – the colossal opportunity in what I will glibly call the centre of British politics, and the desperate need for us.

“I obviously want the Liberal Democrats to recover, become the next government of the country and solve all the problems.”

The party will soon to announce plans for a radical shake-up of its rules that could allow a non-MP to succeed Sir Vince as leader, a source confirmed to Sky News last week.

But they dismissed reports he was on the brink of quitting, saying Sir Vince has “no plans to step down any time soon.”