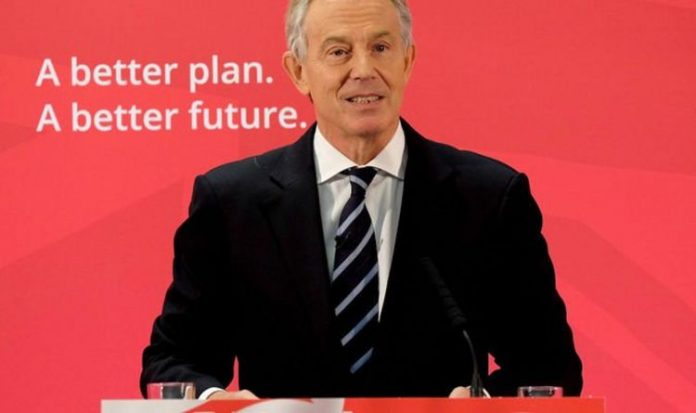 The former Prime Minister was a keen advocate of ID cards for all UK citizens following the events of 9/11 but was later billed as an “entitlement card” to fight against benefit fraud. A scheme began its rollout in 2009 but was scrapped in 2010 by the Tory/Lib Der coalition government.

This comes after Dominic Cummings bids to transform the government’s use of data despite privacy fears.

In the new scheme, people will get an online identity which can be used for daily activities such as proving age, registering with a GP and buying properties from a different location.

In response to the new scheme, the former Prime Minister said once a coronavirus vaccine is in use “you’re going to want a record of the fact you’ve been vaccinated”.

Speaking to the BBC’s Newscast podcast, Mr Blair said: “You’ll want a record kept by the government of who’s been vaccinated – this will be essential, again, to restoring confidence.

“You don’t need a large amount of information. People give a lot more information to their supermarkets than they do to the government.”

However, much like when Mr Blair tried to introduce his own scheme, it has been met with backlash from civil liberties groups saying they would lead to sensitive records being “at the fingertips” of authorities.

Silkie Carlo, director of Big Brother Watch, said: “The idea of digital ID and vaccination checks could easily lead to health apartheid that few would expect of a democratic country.

“Digital IDs would lead to sensitive records spanning medical, work, travel and biometric data about each and every one of us being held at the fingertips of authorities and state bureaucrats.

“This dangerous plan would normalise identity checks, increase state control over law-abiding citizens and create a honey pot for cybercriminals.”

The public has also grown angry over Mr Blair’s appearance on Newscast, with many saying it is common sense not to listen to him.

One person wrote: “I have no confidence in any government, I don’t need it, it’s not a requirement.

“What I do know is that Tony Blair should shut up, he’s had his say and it ended quite badly.”

Another person wrote: “This has been the plan all along, using fear of contracting COVID-19 to implement a plan to digitally track people around the globe and in the process trample their civil liberties and rights to privacy.

“Big Brother is knocking at the door. Fear is about to welcome him in.”

Someone else simply put: “I wasn’t sure before, but knowing Blair supports this idea definitely convinced me that it’s an absolutely horrible idea.”

Dominic Cummings to change use of data (Image: Getty)

Another person hit back at both Mr Blair and the BBC and said: “Tony Blair knows nothing about common sense and BBC clearly has never heard the phrase ‘flogging a dead horse’.

“They should ask the opinion of someone who is actually relevant.”

According to the announcement, the government is “exploring how secure checks could be made against government data” and proposed it does not resurrect the ID card scheme.

Digital Infrastructure minister Matt Warman said: “Digital technology is helping us through the pandemic and continues to improve the way we live, work and access vital services.

“We want to make it easier for people to prove their identity securely online so transactions can become even quicker – it has the potential to add billions to our economy.”

Cabinet Officer minister Julia Lopez added: “There is a need and an expectation for the government to make it easier for people to use digital identities quickly, safely and securely, and we are committed to enabling this.”

This is not the first time Mr Blair has spoken in favour of digital ID cards since leaving Downing Street.

Back in June, Mr Blair said a similar system would be able to operate alongside track and trace programmes during the pandemic.

Speaking at the virtual CogX technology conference, the former Prime Minister said: “There has always been a good cause for introducing some form of digital ID but I think that case is even more powerful today.”