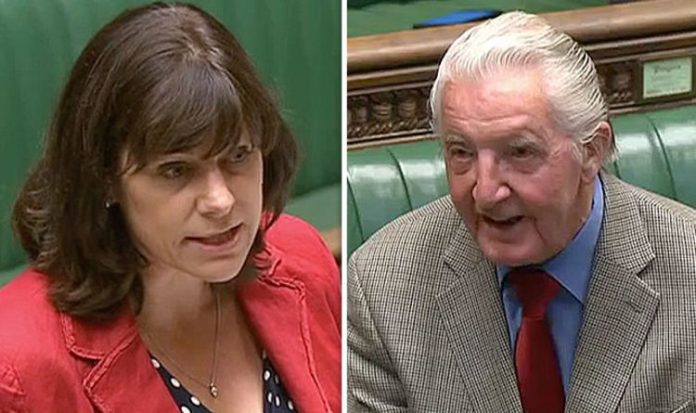 Business Minister Claire Perry claimed the Labour Party MP “must be hell to live with” after he continued to interrupt her in the Commons.

Some MPs in the chamber erupted with laughter after the Tory Minister took a swipe at Mr Skinner.

The Labour MP for Bolsover said: “Not only is it true that the number of people on zero hours contracts is rising at a very high rate and the Government doesn’t seem to think that it is anything to do with them.

“There are close on a million people on zero hour contracts.

“There are two or three thousand on one pit site near Mansfield in Shirebrook in my area.

“The Government sit idly by. It is only when they are talking about the golden future for workers that they get stuck into getting rid of zero hour contracts that we will believe a word that they say.”

Ms Perry replied: “I am afraid the honourable gentleman, despite the rhetoric, is just wrong.

“I think what we are seeing, and I visited some of the pit areas, one of the saddest things I ever saw was a former pit engineer, who because of the appalling transport links that had been left as a terrible legacy to the pit areas, he was unable to get out of the area to find work.”

Labour MP Mr Skinner then started to should out “they are called zero hour contracts” interrupting Ms Perry.

The Tory Minister continued: “He will know if he would just listen for one second, that many people on zero hour contracts actually choose that level of flexibility.”

The Conservative MP then snapped at Mr Skinner who continued to interrupt her in the House of Commons.

Some MPs in the Commons were heard laughing and jeering following the quip.

Ms Perry added: “He will know that this Government is the Government determined to drive up wages and standards for working people because we are the party of working people not the north London intelligentsia.”