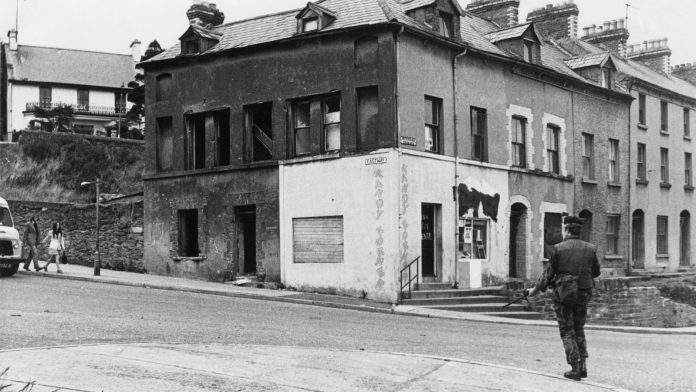 A Conservative MP has expressed his frustration with the government’s handling of investigations into Northern Ireland veterans, branding Theresa May’s response to his question in parliament “not good enough”.

Johnny Mercer asked the prime minister to assure the Commons she was personally involved in efforts to stop the “completely abhorrent” investigations into former soldiers.

The ex-army officer said the “vast majority” of the country is against seeing them being “dragged through the courts” over events linked to the Troubles.

In July, more than 30 Tory MPs supported a backbench proposal for a 20-year time limit on reopening cases.

I asked PM about how she was personally investing of herself in stopping the hounding of our elderly servicemen and women by her Government. I know we are in rough waters, but this is some of our people’s ‘every-day’. Her answer was not good enough. We keep going. #countryfirst pic.twitter.com/3DOMc1qTSY

A consultation document issued by Northern Ireland Secretary Karen Bradley to deal with the legacy of the Troubles does not include provision for a statute of limitations.

The new head of the army, General Sir Nick Carter, has vowed to defend soldiers facing claims of wrongdoing.

The Plymouth Moor View MP added: “As prime minister can I ask what she is personally doing, how she is personally investing of herself in this process to bring to an end something the vast majority of her country finds completely abhorrent?”

Mrs May said she was aware of the concerns many MPs had on the issue, which is why she had held talks with Ms Bradley on a number of occasions.

The PM acknowledged the investigation process was flawed, adding: “It isn’t working for soldiers, for police officers or for victims – a group, in fact, which includes many soldiers and police officers as well.

“Though while a number of terrorist murders from the Troubles are actively under investigation by PSNI and other police forces, under the current mechanism for investigating the past there’s a disproportionate focus on former members of the armed forces and the police.

“We want to ensure all outstanding deaths in Northern Ireland are investigated in ways that are fair, balanced and proportionate.”

Her answer failed to satisfy Mr Mercer, who posted a clip of their exchange on Twitter with the message: “I know we are in rough waters, but this is some of our people’s ‘every-day’.

“Her answer was not good enough. We keep going.”