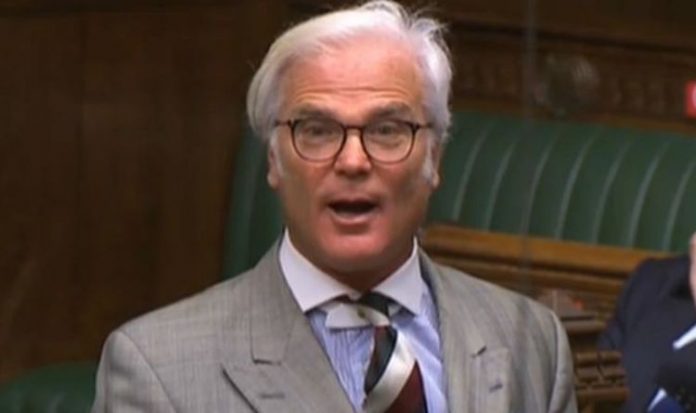 Tory MP Sir Desmond Swayne spoke from the Opposition bench as he said “there’s no room anywhere else” but his appearance has sparked fury from other Tories. The MP for New Forest West sat among the SNP benches in the House of Commons as he argued that Parliament’s social-distancing procedures are “ridiculous”. Sir Desmond asked his colleague, Sir Robert Syms MP: “Does he believe that it is proportionate given that in the last two weeks of July five times more people died of seasonal flu than of COVID-19?

“Are the measures that we’re taking proportionate when we had Hong Kong flu it carried 80,000 people, did we behave in this ridiculous way?”

Former Brexit secretary and Tory MP for Haltemprice and Howden, David Davis said: “We have a chamber that doesn’t work.”

While Sir Robert Syms said: “I don’t think this House is actually in a position to be calling itself a proper parliament”

Tory MP for Christchurch Chris Chope condemned the “knee-jerk way in which the Government is dealing with many of our constituents”.

Steve Brine added: “We’re living a lie to the public at the moment. We’ve never worked harder, but we’re not working hard in SW1.”

The House of Commons has moved to a hybrid system during the coronavirus pandemic allowing MPs to particpate in the Chamber either in person or remotely.

The social distancing measures have resulted in long queues outside Parliament as MPs have to wait for the opportunity to vote.

After returning from recess, the number of MPs allowed into the Chamber remains at 50.

This could be increased if MPs were to wear masks and give speeches sitting down which has been deemed “obviously not practical” by parliamentary sources.

Tory MP Steve Baker posted a video on his Twitter of himself during the queuing and deemed the whole thing to be a “farce”.

Mr Baker captioned the video: “This is a farce. I should think we will be back to remote voting before we are all much older.”

He added: “There is a queue snaking all the way behind me.

“What is even worse than the practical reality is it is all being played out in front of the political lobby journalists.”