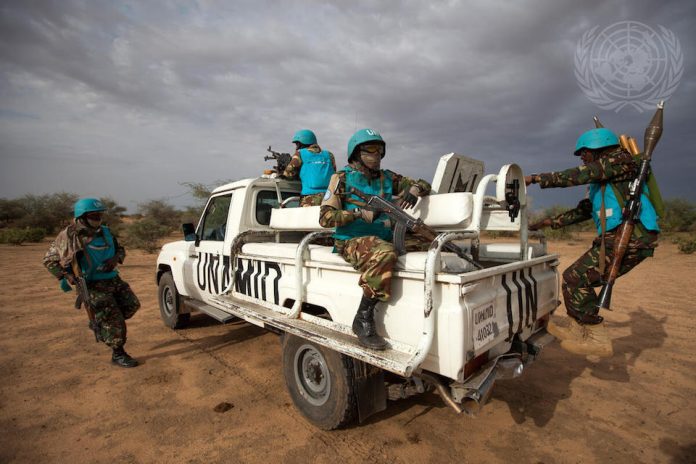 The United Kingdom welcomes the adoption of this resolution, which outlines the modalities of an orderly and safe withdrawal of the United Nations-African Union Mission in Darfur (UNAMID). With the adoption of this resolution, the Security Council has reaffirmed the importance of the safety and security of peacekeepers and has further advanced the transition from peacekeeping to peacebuilding in Darfur.

However, we regret that it was not possible to adopt a more prudent resolution that would have enabled UNAMID to continue to provide support to the Government of Sudan and the people of Darfur during its drawdown, in line with recent Security Council precedent on the closure of United Nations Peacekeeping missions.

United Nations peacekeeping missions in Haiti, Cote D’Ivoire, Liberia, Sierra Leone, and Timor-Leste all had mandates until the end of their drawdowns. The position of the Government of Sudan, the recommendation of the United Nations and the African Union, and subsequently the position adopted by some members of this Council, prevented the Council from following this precedent. As such, UNAMID’s mandate will end on 31 December, despite the fact that approximately 7,000 uniformed personnel and 900 civilian staff remain on the ground in Darfur. All they will be able to do is pack their bags and wait to leave Darfur.

Given its size and location within Sudan, UNAMID’s withdrawal will be unlike any recent United Nations peacekeeping closure. This enormous logistical challenge is likely to be further complicated by the ongoing Covid-19 pandemic. Furthermore, there is a troubling precedent of handed over UNAMID teamsites and assets being looted, rendering them useless to the local authorities and people of Darfur.

The Government of Sudan requested the termination of UNAMID’s mandate. It now has a responsibility, at both the national and local level, to cooperate fully with the United Nations and the African Union during UNAMID’s drawdown and liquidation. The United Kingdom urges them to take all necessary steps to ensure that UNAMID, its personnel and their contingent owned equipment can depart from Darfur in an orderly and safe manner. We also call upon the Government of Sudan to ensure the security of handed over UNAMID team sites that will not be used by UNITAMS or its integrated Country Team and, in line with existing agreements, ensure their utilisation exclusively for civilian end-user purposes to benefit the people of Darfur.

In light of the termination of UNAMID’s mandate, the responsibility for security, and specifically for protecting civilians in Darfur, now rests solely with the Government of Sudan. As recent spikes of violence in Darfur highlight, this will not be an easy undertaking. The United Kingdom welcomes the Government of Sudan’s strong commitment to fully assume its responsibilities and urges them to implement swiftly their National Plan for Civilian Protection. In addition, we urge all parties to uphold all their commitments in the recently agreed Juba Peace Agreement and ensure its full implementation. Once fully operational, the United Nations Integrated Transition Assistance Mission in Sudan (UNITAMS) will be able to play an important role in supporting the Sudanese authorities to build their civilian protection capacities. In this regard, we call on the Government of Sudan to cooperate fully with the United Nations as it seeks to swiftly operationalise UNITAMS, and ensure its transition from UNAMID is sustainable.

Whilst this resolution sets a clear path for the orderly and safe withdrawal of UNAMID, and transition to UNITAMS, we do not believe that it should set a precedent for future peacekeeping withdrawals. The United Kingdom hopes, where possible, the Council, and the United Nations, can return to the best practice of providing peacekeeping missions with mandates until the completion of their withdrawal as a means to ensuring safe and sustainable transitions from peacekeeping to peacebuilding.