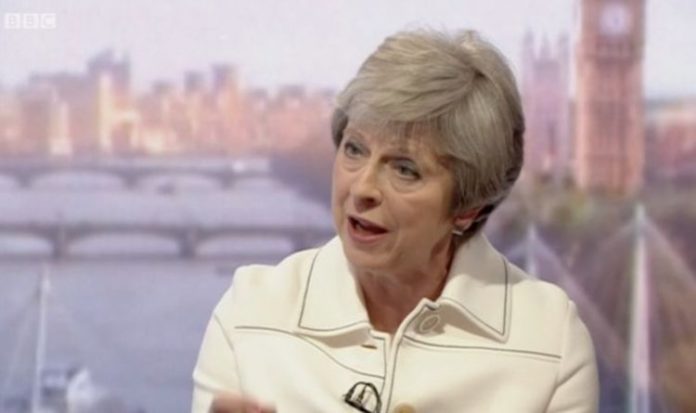 During his meeting with Theresa May at Chequers on Friday, Mr Trump offered advice on how to negotiate the Brexit deal, suggesting that she aimed for “more than was expected” – advice he published in his best-selling book The Art of The Deal.

Mr Trump revealed at a press conference on Friday he had privately suggested Mrs May should activate a “brutal” option to come out with the best deal – which today Theresa May revealed to be a suggestion to “sue” the EU.

And his advice didn’t stop there, with the US President telling Theresa May to “carve out” a deal from her suggested common rulebook for customs, to ensure the EU put it in writing that the US and UK can negotiate their own trade deal.

Piers Morgan was granted access on board Air Force One for an exclusive 30-minute interview where he questioned Mr Trump on a range of issues, including a future deal with the UK once it leaves the EU on March 29, 2019.

Mr Morgan asked: “Can you look me in the eye Mr President and say there will be a great trade deal if we get this damn Brexit thing right?”

The US President replied: “Oh I think we’re going to have a great trade deal, I’ve really no doubt about it.

“We’re going to get it. I said to Theresa May, ‘make sure you have a carve out, you have to have a carve out’ – where no matter what happens they have the right to make a deal with the United States.

Mr Morgan then asked Mr Trump: “And has Theresa May looked you in the eye and said ‘We will get there?’”, to which the president responded: “Well she feels she’s going to be able to make a deal, yeah.”

Theresa May appeared on the Andrew Marr Show on Sunday morning to talk about the new Brexit White Paper and her now infamous meeting with the controversial president.

She told Mr Marr on his weekly Sunday morning show: “Carve-outs are things that are done in trade deals around the world. If you do a trade deal with another country and you have, in certain areas, standards you want to abide by that they don’t, then you can have a carve-out within that trade deal.

“That’s an issue that other countries will want to discuss with us from their terms that we’ll discuss with them in our terms. this is about the standards that you want to abide by as a country.”

Mr Marr asked Mrs May: “So you can carve out the common rule book even before you’ve negotiated it?”

Mrs May sternly replied: “Free movement is coming to an end – it is NON-negotiable. “

Long-time political journalist Mr Marr concluded the interview by asking: “Can you trust a word that he says?”

Mrs May, smiling, replied: “We come to agreements and we put them into place. That is part of the highest degree of special that we have,” referring to public comments that Trump made about his meeting with the British Prime Minister on Friday.

She said that there can be carve outs if the other party doesn’t agree with part of the deal.