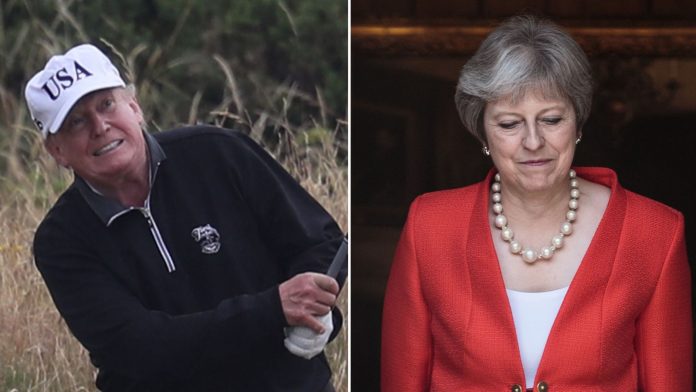 Theresa May has revealed Donald Trump told her to “sue the EU” and “not go into negotiations” over Brexit.

The prime minister made the bombshell revelation as she attempted to defend her proposed Brexit deal amid fierce criticism from Conservative Leave-supporting MPs.

With growing talk of Tory Brexiteers trying to topple Mrs May unless she changes her plans, the prime minister also defiantly declared: “I am in this for the long term.”

As well as pressure from within her own party to change her Brexit strategy, as agreed by ministers at Chequers earlier this month, Mrs May also faced claims from Mr Trump last week that her Brexit strategy would “kill” hopes of a US-UK trade deal.

Although Mr Trump later backtracked on those claims following talks with Mrs May on Friday, the US president confirmed Mrs May had ignored his “suggestion” on how to deal with Brexit negotiations as “maybe too brutal”.

Asked on Sunday what that advice was, the prime minister told the BBC’s Andrew Marr Show: “He told me I should sue the EU. Not go into negotiation, sue them.”

However, Mrs May also highlighted how – at a joint news conference following their talks – Mr Trump had said she should not walk away from negotiations with Brussels.

Mrs May used the TV interview to try to sell her Brexit proposals, which have been met with an angry response from Tory Brexiteers and prompted the dramatic resignations from her cabinet of former Brexit secretary David Davis and ex-foreign secretary Boris Johnson.