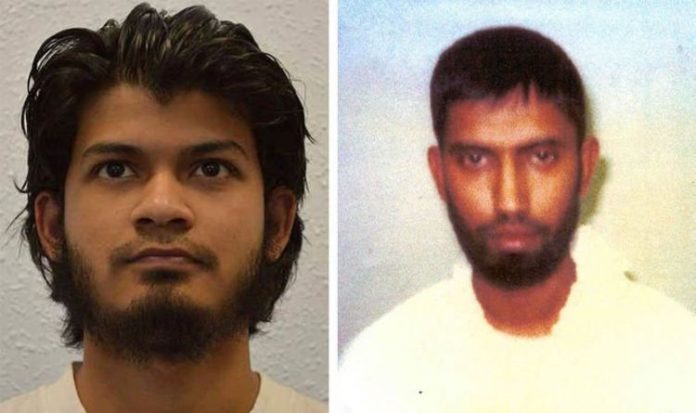 The UK’s first al-Qaeda inspired bomber, Moinul Abedin, was quietly freed from a 20-year jail sentence earlier this month. The father of two, 45, was jailed in 2002 after police found bomb-making equipment at a house he rented in Birmingham. He was released on licence in 2012 after serving less than half of his sentence but was hauled back to prison within months for using a laptop and wiping its memory, in breach of his licence.

Meanwhile Shazib Khan, 27, has been released after serving half of an eight-year term for trying to go to Syria to join IS.

Khan, who was jailed in 2016, faces five years on licence. Terror fanatics who could be free within weeks are said to include jihadist plotter Yusuf Sarwar, 28, who was jailed for more than 12 years in 2014. Sarwar, who travelled to war-torn Syria, is allegedly set to apply for release next month.

Fellow IS plotter Mohammed Zahir Khan, 42, is also due up for parole soon.

In the summer he failed in a legal bid after the High Court ruled Parliament was right to end automatic release halfway through a sentence.

The new rules were rushed through after two terror attacks by released offenders. The High Court said the changes had been a “logical and rational” response to the threat.

Osama Bin Laden’s right-hand man and former London spokesman Abdel Bary, 60, is also due to be extradited back to the UK from the US.

However, Bary had been in custody for 16 years when he was sentenced and will reportedly return to Britain within weeks.

News of the releases comes as the UK terror threat has risen to “severe”.

A Ministry of Justice spokesperson said: “We’re protecting the public by keeping terrorists behind bars for longer.

“They face strict conditions on release and can be returned to prison if they breach them.”