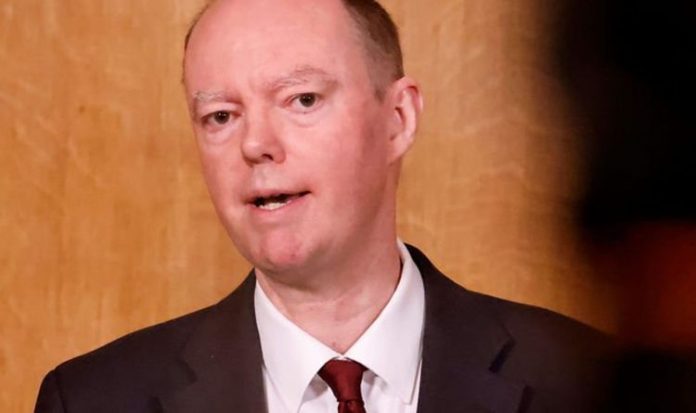 Professor Whitty, England’s Chief Medical Officer, has said “we must act now” otherwise the NHS risks becoming overwhelmed. His stark message came just moments before the Prime Minister announced another nationwide lockdown during a televised address to the nation. Mr Johnson was forced to revert back to draconian measures – including the closure of schools until mid-February – after coronavirus infections in the UK reached a record daily high.

A further 58,784 positive cases of COVID-19 were detected the latest 24 hour period.

It is the seventh successive time the daily figure has surpassed 50,000 infections.

The continued surge has prompted Professor Whitty and his fellow Chief Medical Officers of Wales, Scotland and Northern Ireland, to recommend the UK raises its coronavirus alert level from level 4 to the highest level 5 threshold.

They warned the NHS is at risk of being overwhelmed within 21 days “in several areas” if no further action was taken.

After the Department for Health implemented the measure, Professor Whitty gave an alarming update on Twitter.

He said: “COVID cases are rising rapidly across the UK in large part due to the new variant.

“The NHS is treating many more COVID patients and vaccinating vulnerable citizens. NHS staff deserve our profound thanks.

“But we must act now or the NHS will come under even greater pressure.”

At 8pm this evening, the Prime Minister announced England will enter a third national lockdown.

Speaking directly to the British public from inside Number 10, Mr Johnson warned the new strain of coronavirus was between 50 and 70 percent more transmissible.

He confirmed primary schools, secondaries and colleges will move to remote learning from Tuesday – with summer exams cancelled.

Early years learning, such as nurseries are allowed to remain open and existing childcare bubbles can stay in place.

Like in March and April, the clinically extremely vulnerable are advised to begin shielding again, with those affected issued a letter.

Mr Johnson urged the public to stay at home, with people only permitted to leave their homes for limited reasons, such as food, medicine and exercise.

Opening his speech, Mr Johnson said: “I want to say to everyone right across the UK that I know how tough this is.

He said this figure was 40 percent higher than there was during the first wave of infections in April.

The Prime Minister insisted there was reason to be hopeful and stated the roll out of a COVID-19 jab was “one huge difference” compared to March and April.

He added: “With every jab that goes into our arms, we are tilting the odds against Covid and in favour of the British people.

“Thanks to the miracle of science not only is the end in sight but we know exactly how we will get there.”