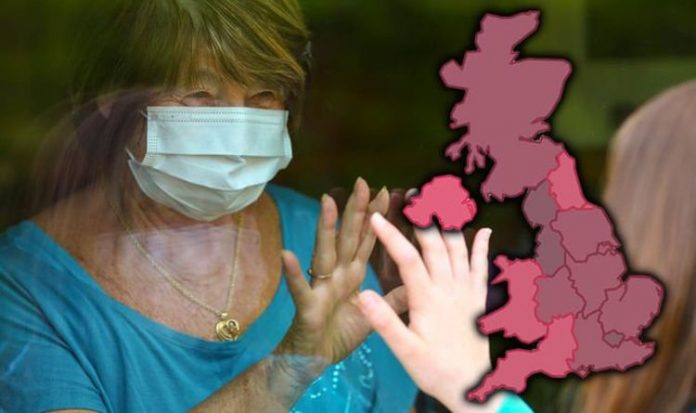 Britain was put under lockdown in March and now several months later restrictions are still being eased step-by-step. But yesterday’s figures show a huge rise in daily coronavirus cases, with the rate on September 6 having surpassed those recorded at the start of lockdown.

Health Secretary Matt Hancock first indicated there would be a UK lockdown when visited the House of Commons on March 16 to insist all unnecessary social contact should cease.

However, lockdown was not officially implemented until Boris Johnson addressed the nation, mandating everyone stay at home on March 23.

Cases the saw a huge rise as the coutnry enterred the strictest form of lockdown before starting to fall towards the start of May.

New daily cases have been low since the start of June, but Government data show the numbers have started to creep up once more.

This is the highest number reported in a single day since May 22 and is higher than the reported numbers from before and on the date when lockdown was implemented.

Each week Public Health England publishes a report tracking the number of new cases and where there have been small increases in COVID-19 activity.

According to the latest report, published on September 4 analysing data up to September 1, case rates were highest in the 15 to 44 year age group and incidence was highest in Bolton, followed by Oldham.

Pharmacist Navid Sole said the public and Government are “not taking this matter seriously.”

Mr Sole said: “Cases are rising and public health is the priority.

“Restaurants and public spaces being open is a mistake and the government should be less worried on the economic status of this country and to start focusing on the well-being of the public.”

Local lockdowns are an ineffective measure according to Mr Sole.

He said: “Local lockdowns sound silly to me.

“People can still leave their homes and visit other parts of the UK and they could easily be carriers of the virus.

“The whole of UK should be on lockdown and quarantine until vaccines are established. Otherwise, the number of cases will keep inclining.”

He also called local lockdowns a “diabolical idea, adding: “There should be a nationwide lockdown.

“Coronavirus is not a joke and the virus is still with us and knowing it’s a virus this can easily be spread from person to person.”

The expert added: “The government needs to step up their game and to stop day dreaming. We are living in fear and people are dying every day.

“The tax money we provide to the government needs to be used with treasure and to implement ideas of how we can all be safe especially as winter is approaching.”

There is no doubt there will be a second spike according to the medical expert.

When asked if there will a second spike, Mr Sole said: “ Yes, 100 percent. If you observe the peak it’s starting to rise and this is not a good sign.

“No one is taking this seriously and as a healthcare professional myself this needs to stop and immediate action should be carried out ASAP.

“As a pharmacist, I have suffered during this pandemic and there is no understanding by the government that if a second peak rises we as a community pharmacy will struggle and there will be further financial strains.”