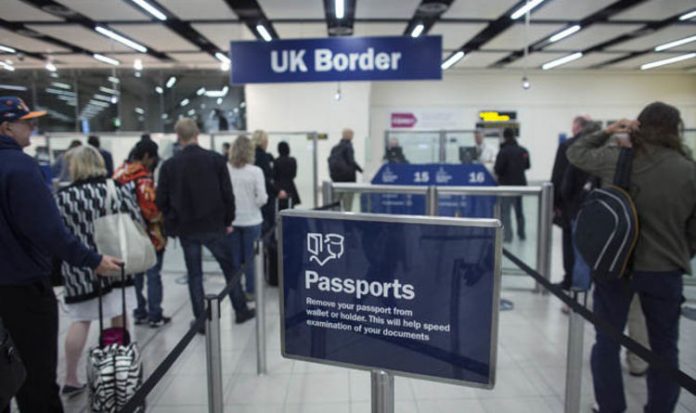 The number of illegal immigrants in the UK is rising by 70,000 a year (Image: getty)

Taking into account an average of just over 35,000 departures a year, this works out at a net growth of nearly 70,000, according to the campaign body.

It described the scale of illegal immigration as a “scandal” and called for a number of measures, including the introduction of ID cards.

Migration Watch, which campaigns for tighter immigration controls, says its calculations suggest the gross increase in the illegal immigrant population stands at around 104,950 per year.

It claims the figure comprises an estimated 83,600 potential over-stayers, 12,850 people detected illicitly arriving in the back of trucks and 8,500 failed asylum seekers who do not leave the country.

“This means a net addition in the illegal population, not accounting for regularisation of those with no right to be here, of 69,750 per year.”

Migration Watch chairman Lord Green of Deddington said: “The scale of illegal immigration to Britain is a scandal that has gone on for too long.

“It undermines public acceptance of genuine refugees and is damaging to community relations generally.”

It is the latest attempt to put a figure on how many people enter the country unlawfully, or stay without valid leave.

In 2005, a Home Office assessment put the total unauthorised migrant population living in the UK in 2001 at an estimated 430,000.

In January, a Commons report warned that anxiety about the issue has been allowed to “grow unchecked” because of a shortage of official information.

Migration Watch made a number of recommendations in its report, including a £100 million boost to immigration enforcement, a “major increase” in the size of the detention estate, and the introduction of ID cards.

A Home Office spokeswoman said: “We do not recognise the estimate provided by Migration Watch UK.

“By its very nature, it is not possible to estimate with any confidence the size of the illegal population.

“We are committed to reducing the size of the illegal population. When someone has no leave to remain in the UK, we expect them to leave the country voluntarily.

“Where they do not, we will seek to enforce their departure. This includes foreign criminals of whom we have returned more than 44,500 since 2010.”

Meanwhile a new survey, carried out by the Pew Research Centre, found that 92 per cent of Greeks, 78 per cent of Italians and 66 per cent of Germans and British expressed disapproval with the EU’s handling of the issue.

In Sweden, there is 84 per cent disapproval, in Hungary, which was recently censured by the EU parliament for making it illegal to assist refugees, 80 per cent of people say Brussels has got it wrong, while in France 74 per cent  disapprove, higher than the Spanish rate of 71 per cent.

The study found people preferred their own governments, rather than the EU, to make decisions around migrations.

As discontent with the EU’s migrant policy comes as Austria, which is calling for policies preventing migrants from entering the European Union without prior authorisation and applying for asylum, holds the EU presidency.

More than two million migrants have arrived in Europe since 2009, with a significant influx from the middle east and north Africa.