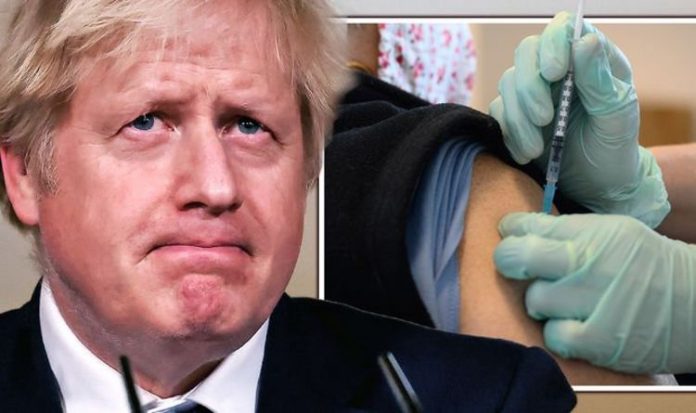 Prime Minister Boris Johnson has pledged to offer “hundreds of thousands” of jabs every day by January 15. The Government has set a target to offer vaccination slots to 15 million Brits in the top four priority groups, which includes all those 80 and over, by mid-February. But while the Government’s promises sound hopeful in theory, we’ve all come to expect a very different reality from what is said. And according to one expert, it’s going to take much longer to vaccinate the number of people needed to end lockdown than initially anticipated.

The nation is eagerly anticipating the end of lockdown and a return to normal life after being stuck in a back-and-forth shutdown for almost one year.

And it’s been made very clear that, without enough people being vaccinated, a return to normal life isn’t possible.

This summer saw the nation reopen as Eat Out to Help Out urged people to leave their homes and help small businesses around the country.

The inevitable consequences of the scheme were increased hospital admissions, a 4-Tier system, local lockdowns and the R-Rate surging to higher levels than ever before.

READ MORE: New Covid vaccine: Where is the Moderna vaccine from?

Creator of the Vaccine Queue Calculator, Steven Wooding told Express.co.uk: “It has been shown that if you get vaccinated, you have a very small chance of needing hospital treatment.

“That is the main purpose of the current lockdown – to stop the NHS and hospitals from being overwhelmed with Covid patients.

“So I would say [lockdown ending] depends a lot on enough people being vaccinated, given the time of year and the new strain that’s emerged that is more infectious.”

In terms of how long the vaccination programme will take to immunise enough people for a return to normality, Mr Wooding said it’s going to take longer than predicted.

Mr Wooding stressed the importance of this programme, adding it “will be the key to getting back to normality”.

The expert said to achieve the target set out by the Prime Minister, two million doses will need to be administered on a weekly basis, which is much greater than the “hundreds of thousands” pledged by Mr Johnson.

Mr Wooding said: “For the summer target discussed above, it’s 1million doses a week, but for the target set out by Boris Johnson where the top four groups in the priority list get their first dose by mid-February, it’s more like two million doses a week.”

The vaccine queue calculator created by Mr Wooding and his team uses a default rate of one million jabs a week to work out where people slot into the timeline.

He added: “Given that so far it’s taken a month to vaccinate the first million, I’m currently cautious to set the default rate in the calculator above one million a week.

“If the vaccination rate goes above one million a week consistently, then we will increase the rate in the calculator.”

The vaccine programme, inevitably, isn’t going to be as black and white as the Government has set out, with a number of logistical reasons likely to affect the target figure.

It’s important to factor in missed appointments and people refusing to be vaccinated, which will undoubtedly have an impact on the numbers.

To work out your place in the vaccine queue, you can use Mr Wooding’s calculator here.