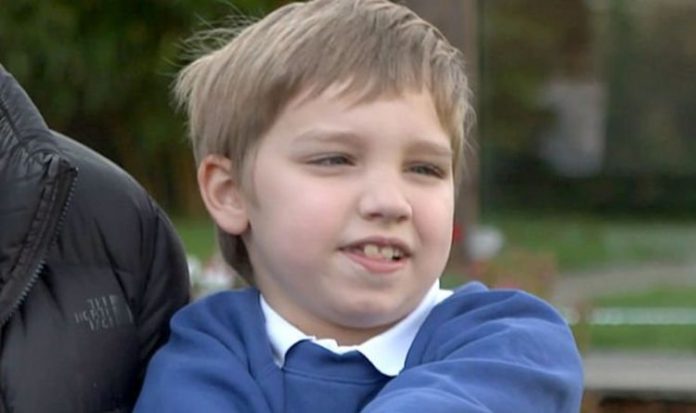 At least three victims suffered convulsions after the anonymous internet bullies unleashed thousands of strobes and garish messages. Today the Express backs Zach’s Law which demands action to bring the perpetrators to Police are investigating the assaults which have peaked with up to 200 dangerous tweets a day.

In one vile attempt to cause maximum distress, Zach Eagling, 8, who suffers from epilepsy and cerebral palsy, was targeted after he raised £20,000 by walking 2.6km unaided around his garden.

He was inspired by his hero Captain Sir Tom Moore.

Zach’s mother Claire Keel, 39, said: “I was crying my eyes out, just thinking that somebody wants to see harm done to my child.

“It was just this completely reprehensible act. They weren’t thinking of the consequences.”

Claire, of Liversedge, West Yorks, added: “There was a little gang of them messaging each other and us. It was organised and they were intentionally trying to harm people.” The trolls struck when Zach announced on Twitter that he wanted to raise money for the Epilepsy Society after being inspired by Captain Tom’s heroics for the NHS.

Zach’s account on the social media platform was bombarded with tweets of strobes and multi-coloured images designed to spark convulsions.

He did not see any of the images but several people with epilepsy did suffer seizures.

Police are now investigating the trolls for possible assault.

The society is campaigning for legislation – dubbed “Zach’s Law” – to protect people with the disability from being targeted in vile cyber attacks.

Its campaign mirrors the Daily Express crusade to wipe trolls off the internet by pressuring the tech giants and the Government to take action.The society said it had been attacked by the same group.

But the message blizzard peaked around the time of Zach’s walk last May.

More than 200 toxic tweets landed as he completed the “2.6 challenge”, the fundraiser to replace the postponed London marathon.

He had never walked without his walking frame before, so, accompanied by his mother and supporters, he completed 2.6km in laps round their garden.

The online attack took the form of messages, tagging in the society’s Twitter account and those of individual members who tried to watch a video of Zach.

Others contained moving shots from nightclubs.

The society wants ministers to create a new offence of sending messages capable of inducing an epileptic seizure. The new definition would be included in the forthcoming Online Harms Bill.

Clare Pelham, chief executive of the Epilepsy Society, commented: “The new proposals will enable the law to flush out the cowards who hide behind anonymous names and target people with epilepsy as a form of perverted entertainment.”

One man, who did suffer a minor reaction to the flashing messages, told the Daily Express: “To me it is assault, and to see someone enjoying hurting people is shocking.” Ms Keel added: “We didn’t want this. We just wanted to do something in lockdown, and raise a few quid for a charity.

“The social media companies should be held accountable for what’s on their platform.”

Damian Hinds, Tory MP for East Hampshire, said: “You know somebody has this condition and you send them these flashing messages? You wonder what goes through the heads of people who do that.”

“If Twitter determines accounts are dedicated to causing offline harm, they will be permanently suspended.”