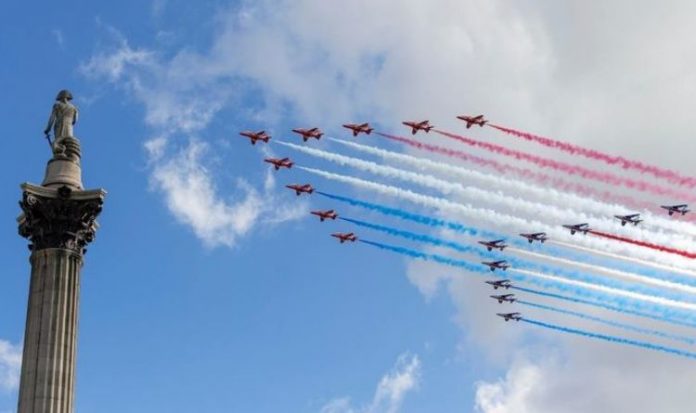 VJ Day is also known as Victory over Japan Day, Victory in the Pacific Day, or V-P Day, and takes place this month. A red arrows flypast, a two minutes silence and Royal Family appearances are all scheduled for VJ Day this year.

When is VJ Day? Why is VJ Day commemorated?

VJ Day falls this year on Saturday, August 15 – when across the country commemorations will take place.

The day marks the moment Imperial Japan surrendered in World War 2, bringing the war to an end.

Churches across the country will ring a single bell 75 times from 11.10am, to mark the 75 years since Japan surrendered.

Prince William will also feature in VJ Day 75: The Nation’s Tribute, a special programme filmed at Horse Guards Parade that will be broadcast on BBC One.

Alongside veteran testimony, William will honour and give thanks to all those who sacrificed so much during the Second World War.

Prince Philip will be shown on large screens in locations across the country in a poignant photo montage showcasing living Second World War veterans.

The Duke of Edinburgh was on board HMS Whelp in Tokyo Bay for the signing of the Japanese surrender.

Prime Minister Boris Johnson said: “When the Second World War ended 75 years ago with the surrender of Japan, British soldiers, sailors and airmen were serving in the Far East, fighting hard to achieve victory – and were among the last to come home.

“On this anniversary I want to remember what we owe the veterans of the Far East campaign.

“They brought an end to the Second World War, they changed the course of history for the better, liberated South East Asia, and many paid the ultimate sacrifice.

“That’s why on this remarkable anniversary – and every day hereafter – we will remember them.”