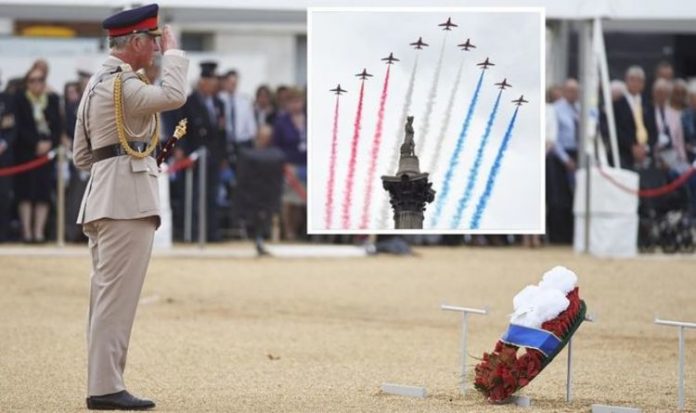 VJ Day this year marks 75 years since the day on which Imperial Japan surrendered in World War 2. Also known as Victory over Japan Day, Victory in the Pacific Day, or V-P Day, it takes place each year on August 15.

The United States celebrate VJ day on a different day – September 2 – as this was when the surrender document was signed, officially ending World War 2.

Each year events are scheduled to commemorate the day and remember those who fought in World War 2.

On September 2, 1945, a formal surrender ceremony was performed in Tokyo Bay, Japan, aboard the battleship USS Missouri.

Fighting had been ongoing for around six years, and the news of Imperial Japan’s surrender was met with jubilation.

The news of the Japanese offer sparked early celebrations around the world, and allied soldiers in London danced in a conga line on Regent Street.

Americans and Frenchmen in Paris paraded on the Champs-Élysées singing “Don’t Fence Me In”.

After news of the Japanese acceptance and before President Truman’s announcement, Americans began celebrating “as if joy had been rationed and saved up for the three years, eight months and seven days since Sunday, Dec. 7, 1941”.

One of the best-known kisses took place on VJ Day in Times Square, one of the most famous photographs ever published – of a sailor and nurse kissing amid the celebrations.

Big screens across the UK will show photo montages of living veterans, including Prince Philip – who was present in Tokyo Bay when the surrender occurred.

Philip was serving onboard the HMS Whelp, which was in Tokyo bay on August 15, 1945.

The Red Arrows will fly across the entire country, passing over Edinburgh, Belfast, Cardiff, and London.

An evening service of remembrance will also be shown on BBC One at 8.30pm, featuring Prince William.

VJ Day 75: The Nation’s Tribute will be led by the Duke of Cambridge and will feature celebs like Hugh Bonneville and Sheridan Smith who will perform key moments from the conflicts.

Britons are being encouraged to share their own World War 2 stories, family histories and messages of remembrance on social media, using the hashtag #VJDAY2020.

There is also a wealth of resources for those wanting to decorate their homes, cook up a storm or print of some colouring sheets for the kids.

You can grab the VJ Day toolkit for bunting and more from the VJ Day 75 website here. https://ve-vjday75.gov.uk/toolkit/

The site includes a recipe for Great British Bake Off judge Prue Leith’s muscavado flapjacks, posters, logos for social media and ideas for how to get involved.