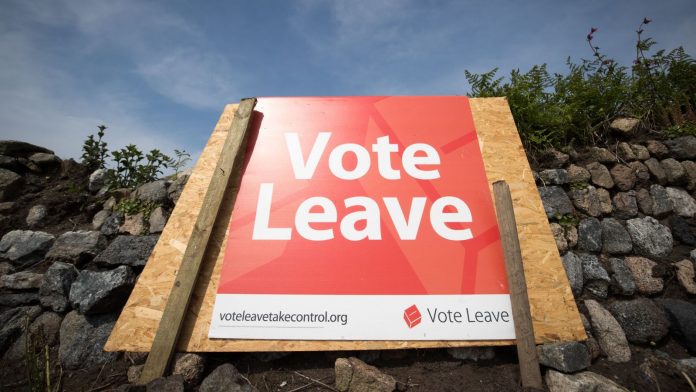 A draft report by the Electoral Commission (EC) has found that the official campaign to leave the EU breached electoral rules during the referendum, according to the former Chief Executive of Vote Leave.

Matthew Elliott has told Sky News that Vote Leave faces a possible fine over allegations that they overspent during the EU referendum campaign in 2016.

But Mr Elliot accuses the EC of a “huge breach of natural justice” by only listening to “the fantasists” without interviewing the directors of Vote Leave for their side of the story.

He also says that a Leave campaign whistleblower who has given evidence to the commission was “completely lying” and was motivated by the desire for a second referendum.

In an interview with Sky News Mr Elliott said of the EC: “Their initial conclusion is that we have overspent, that a donation we made to another group during the course of the campaign was incorrect, we shouldn’t have made that donation.”

But he says the EC has refused to engage or consider evidence that Vote Leave has produced. He said: “They’ve listened to these, quite frankly marginal characters who came out in March, and listened to their stories, but haven’t had evidence from Vote Leave side of things.

“I think it is a huge breach of natural justice that they haven’t wanted to listen to our opinions and our story and we were the people running the campaign.

“We are the people who could give them the facts, rather than basing all their opinion on the fantasists.”

But Mr Elliott says: “One of them wasn’t even in the country during the campaign, one was a minor contractor for a few weeks at the beginning of the campaign and one was barely involved in the campaign.

“The key thing is to understand the motivation of the so called whistleblowers and all three of them who came forward to the commission want to have a second referendum.”

The allegations centre around a 23-year-old fashion student called Darren Grimes. He was given £625,000 by Vote Leave for his youth-focused out campaign BeLeave.

But activist Shahmir Sanni says this was done to keep Vote Leave under the EC £7m spending limit, and the youth group was simply a proxy of Vote Leave itself.

Shahmir Sanni alleges that the cash went directly to Vote Leave’s preferred data marketing company Aggregate IQ – and it remained under Vote Leave control. This would be in breach of EC rules.

“They haven’t found a smoking gun. If they (the EC) follow due process, if they are fair, they will find us innocent.”

Mr Elliott denies suggestions that Darren Grimes worked out of the same office as Vote Leave. He says allegations of cooperation between the campaigns over a messaging service called a “slack channel” were inaccurate and “had nothing to do with vote leave infrastructure”.

Mr Elliott admits the donation made in the last days of the referendum campaign would help Mr Grimes “amplify his message more”. But insists there was no collusion or coordination.

The Vote Leave chief executive does admit that the donation was paid directly to data marketing company Aggregate IQ.

But he insists Darren Grimes asked him to do that, and the marketing company only reported back on how it was spent to Mr Grimes, not to Vote Leave.

Solicitor Tamsin Allen of Bindmans LLP, who represents the whistleblowers, told Sky News: “In March this year we submitted to the Electoral Commission 3 lever arch files of evidence, and a 50 page legal opinion prepared by senior QCs at Matrix Chambers.

“This strongly suggested that criminal offences were committed by members of Vote Leave and Beleave during the Referendum campaign. Having carefully reviewed this evidence, and further evidence which has subsequently emerged, it now seems the Electoral Commission has indeed found them guilty of these criminal offences in its initial report.

“Vote Leave may not like this conclusion, but there is clearly a proper evidential basis for it. The commission should be permitted to complete its work and we await the release of its final report.”

On Tuesday, Vote Leave submitted its rebuttal submission to the EC.

A spokesperson for the EC, said: “The Commission has concluded its investigation and having reached initial findings provided Vote Leave with a 28 day period to make any further or new representations. That period ended on Tuesday 3 July.

“The unusual step taken by Vote Leave in sharing its views on to the Electoral Commission’s initial findings does not affect the process set out in law.

“The commission will give due consideration to the representations made to the commission, including those made by other campaigners under investigation.

“We will then, at the earliest opportunity, publish a thorough and detailed closing report in order to provide a full and balanced account to the public and to Parliament.”