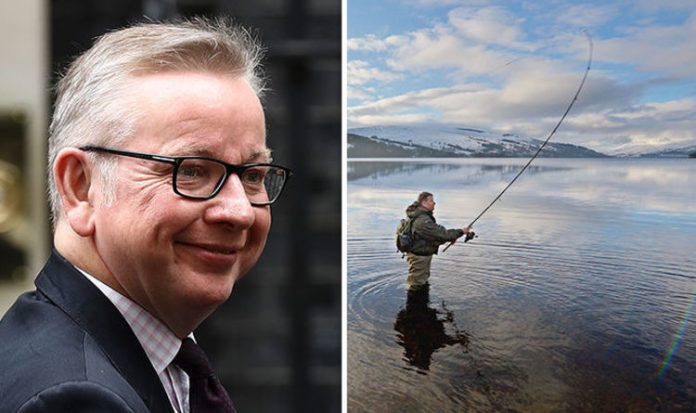 Environment Secretary Micheal Gove is due to outline the post-Brexit plan for a new fishing regime today.

The blueprint could allow British fishermen to catch more fish after the existing EU system quotas is torn up.

A Government source said the new Fisheries White Paper would “set out how the UK will have the opportunity to move towards a fairer share of fishing opportunities, overhauling the current system where UK fishermen have received a poor deal”.

Under the existing policy, limits on different species are set centrally by the EU and quotas are assigned to each country.

Speaking last night, Theresa May said: “As an island nation our fishing industry is the lifeblood of coastal communities around the UK.

“When we leave the EU we will take back control of our waters, while ensuring we don’t see our fishermen unfairly denied access to other waters.

“The plans demonstrate the bright future in store as we build the UK fishing industry for future generations.”

Most Cabinet MPs welcomed the Prime Minister’s proposed white paper as it contained “important elements of a sustainable future for our industry”.

But the Scottish Government said it had “significant concerns” about many of the proposals.

It claimed the white paper was drawn up without meaningful engagement and “completely ignores” the seafood processing sector.

But the Scottish Fishermen’s Federation chief executive Bertie Armstrong welcomed the blueprint and said the plans will allow the UK to become an independent coastal state.

He said: “The white paper enshrines the important elements that we have been arguing for to forge a sustainable future for our industry: allowing the UK to become an independent coastal state, to take charge of who catches what where and to resist any and all attempts to link access to our waters to access to EU markets.

“Of course, there is a long way to go, and we now need our governments to show real backbone in the Brexit negotiations to ensure that these aspirations become reality.”

Environment Secretary Michael Gove, whose father ran a fish-processing business in Aberdeen, claimed there will be a “sea of opportunity” for Britain’s fishing industry after Brexit.

He added: “Our vision for UK fisheries can only be delivered if all four parts of the UK work in partnership with one another.

“The UK Government will continue working closely with the Scottish Government and other Devolved Administrations to develop a fishing policy that works for the whole of the UK.”