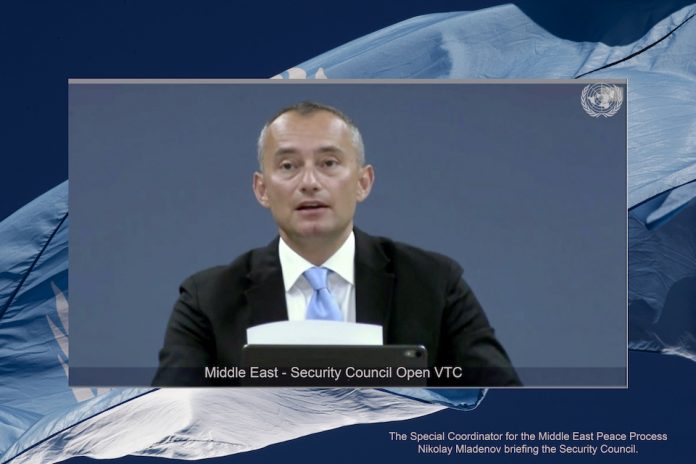 Thank you, Mr President, and thanks as always to Special Coordinator Mladenov for his words.

Mr President, like others, I’d like to start today by expressing our sincere condolences following the death of His Highness the Amir of Kuwait. As Prime Minister Boris Johnson has said, the personal contribution His Highness made to regional stability, and humanitarian assistance, will long be remembered.

These positive steps are already having an impact, such as direct flights from Israel to the UAE and early commercial agreements. More positive progress will come: trade, cultural and scientific links and much more. We urge others across the region to follow the example of the UAE and Bahrain.

Mr President, we must acknowledge that the agreements represent a profound shift in the region. It is critical that we as the international community build on the momentum of normalisation to take forward resolution of the Israeli-Palestinian conflict.

In his recent visit to Israel and the Occupied Palestinian Territories, Foreign Secretary Dominic Raab encouraged both the Israeli and Palestinian leaderships to use the suspension of annexation plans – plans the UK strongly opposed – as an opportunity. We urge the Palestinian Authority to resume co-operation with Israel, in the interests of the Palestinian people. We also call on both parties to make constructive and open steps towards a return to dialogue.

Mr President, whilst the threat of annexation appears to have receded, the UK remains concerned by a number of negative trends on the ground. We reiterate our call on both sides to halt any activity that makes peace more difficult to achieve. In accordance with resolution 2334, this includes terrorism, incitement, violence against civilians, demolition of Palestinian property and settlement advancements.

In Gaza, we welcome the agreement reached on the 31st of August, which has restored a degree of calm and led Israel to lift its ban on fuel and good imports through the Kerem Shalom crossing. On the 15th of September, Hamas once more launched rockets into Israel. We condemn these actions: they are unacceptable, unjustifiable and must stop. As ever, dialogue is the only way to address the situation.

We remain concerned at ongoing plans to take forward settlements including in Givat Hamatos, Har Homa, and in E1. All settlements are illegal under International Law. Settlement construction in these highly sensitive areas would damage prospects for a two-state solution and threaten to further undermine the viability of a future Palestinian state with its capital in East Jerusalem.

Despite the spread of COVID-19, 2020 is on course to be the worst year for Israeli demolition of Palestinian property since 2016. This includes donor-funded structures, paid for by Council Members and international partners. In all but the most exceptional of circumstances, demolitions are contrary to International Humanitarian Law. Mr President, we call on Israel to desist from such actions, and to provide a clear, transparent route to construction for Palestinians in Area C. We are also concerned about ongoing evictions of Palestinians from their homes in East Jerusalem.

Israel, like all countries, has a legitimate right to self-defence, and the right to defend its citizens from attack. But in doing this it is vital that all actions are proportionate, in line with International Law, and are calibrated to avoid civilian casualties. For example, the shooting and injuring by the Israeli Defence Forces of an unarmed, deaf and mute Palestinian at the Qalandia checkpoint on the 17th of August is deeply concerning. The Israeli security forces must provide appropriate protection to the Palestinian people and be seen to conduct prompt, transparent investigations into claims of IDF misconduct.

The Palestinian leadership must continue their efforts to tackle terror and incitement, to strengthen institutions and develop a sustainable economy. Hamas and other terrorist groups must permanently end their incitement and rocket fire against Israel. The United Kingdom Government strongly condemns all forms of violence and incitement to violence. We welcome Fatah and Hamas efforts towards reconciliation, and hope that this can lead to the holding of democratic elections across the Occupied Palestinian Territories.

Mr President, let me end by reaffirming that the United Kingdom remains active on the Middle East Peace Process. We continue to work closely with international partners to advocate a two-state solution and encourage a return to meaningful negotiations. Thank you, Mr President.