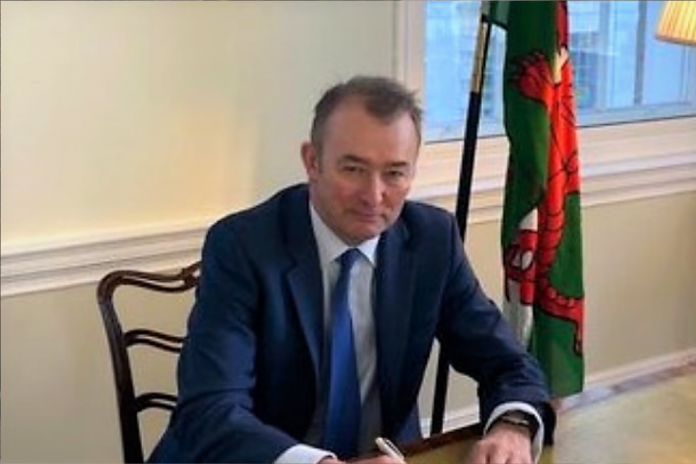 Secretary of State for Wales Simon Hart has paid tribute to the people of Wales in his St David’s Day message.

Highlighting the sacrifices made during the Covid-19 pandemic, the Welsh Secretary thanks front-line workers. Mr Hart also looks ahead to the year to come, highlighting the progress of the vaccine rollout and the UK Government’s plans for growth and recovery in Wales.

These past 12 months have been without precedent. Last St David’s Day we could not have predicted the year to come or even that just weeks later we would be heading into the first lockdown across the UK and the disruption to normal life that has ensued.

The year since has been one of tragedy and I offer my heartfelt condolences to the families and loved ones of more than 5,000 people in Wales who have died or are suffering as a result of this dreadful virus.

It has been the most challenging time since the Second World War – in Wales, across the UK and across the globe. There has been a huge effort from people working on the front line of the pandemic across Wales. Some were deservedly recognised in the New Year Honours, but many thousands more were not and I would like to pay tribute to every one of them and thank them for their selfless work. And I also thank every single person in Wales for the sacrifices they have made in the past 12 months.

The UK Government has also worked to provide support for people and businesses through the disruption the pandemic has caused. We have provided more than £2.7 billion in direct support to businesses in Wales through the Coronavirus Business Interruption Loan Scheme (CBILS) and Bounce Back loans as well as schemes like Furlough and support for the self-employed which have supported half a million people in Wales alone – one in three of the workforce.

The UK Treasury has also provided the Welsh Government with £6.6bn in additional funding this year for its response to the pandemic.

We have also set up more than 50 test centres across Wales, supplied millions of items of PPE and ensured almost 300 personnel from the UK’s Armed Forces are in Wales to support the Welsh NHS.

But we can now see the way out of the pandemic as a result of the ongoing vaccination programme. The speed of its development and its rollout across the UK has been astonishing. It is world leading and Wales is playing a major part via Wrexham’s Wockhardt facility where the Oxford-AstraZeneca vaccine is being produced.

With the ongoing vaccine roll-out we can begin to look to the year to come. Later this week the Chancellor will deliver his Budget, setting the fiscal course for recovery, prosperity, jobs, growth and a green industrial revolution. We have a huge job to do and we are focused as a government on getting the UK back on course and levelling up the whole of the UK. In Wales this means building on the excellent progress of our City and Growth Deals, investing in renewable industries and infrastructure and delivering funding to the communities which most need it.

Ahead of what I believe will be a year of recovery and growth for all our communities, I wish everyone in Wales and all Welsh people around the world a happy St David’s Day.