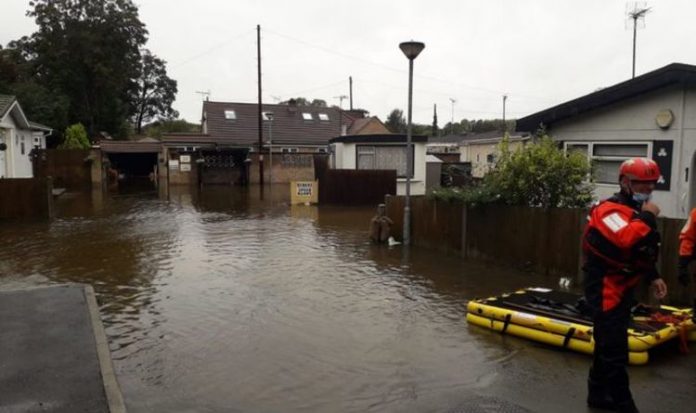 The evacuation was prompted by severe flooding in the area due to rising water levels in the River Colne following heavy rain.

London Fire Brigade have taken a number of people to a local civil centre, LBC news has reported.

Members of the public have been urged to avoid the area.

A blockage is believed to have caused the water levels in the River Colne to rise, wreaking havoc in the nearby areas.

Some 50 people were transported from their homes at Mayfield Caravan Park to a nearby civic centre where they were sheltered.

Firefighters have been working to drain the water.

They also helped local people alongside staff from the Environment Agency.

London Fire Brigade said in a statement: “Three fire engines and around 17 firefighters have rescued fifty people from their homes on Thorney Hill Road in West Drayton due to flooding.

“Mill Road is closed at the junction with Wise Lane.

A statement on the Environment Agency website reads: “Heavy rainfall over the weekend has caused the River Colne to rise, particularly in the Uxbridge and Cowley areas.

“We have also had reports of high levels in the West Drayton area.

“There is likely to be flooding to low lying land and roads close to the river today, Sunday, October 4.

“Flooding from surface water, where water gathers and flows off road surfaces, could also occur.

“Further rain is expected today so we expect the river to remain high for the rest of the day.

“We are constantly monitoring river levels and have staff on standby to attend to any blockages in the river.

“This message will be updated by 8pm this evening or earlier if the situation changes.”