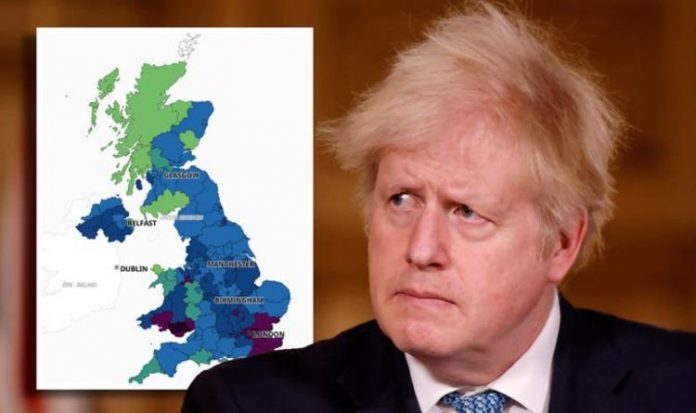 Vallance warns of ‘increased’ measures due to COVID strain

Christmas plans were cancelled for millions across London and South East England after Prime Minister Boris Johnson announced Tier 4 restrictions for the areas. A mutated strain of coronavirus is the cause of tightened measures, stopping those in Tier 4 areas from seeing friends and family over the Christmas period.

Announcing the new Tier 4 measures on Saturday, Mr Johnson said: “I know how much emotion people invest in this time of year, and how important it is, for instance, for grandparents to see their grandchildren, for families to be together.

“So I know how disappointing this will be. But we have said throughout this pandemic that we must and we will be guided by the science.

“When the science changes, we must change our response.”

Read More: Can you move house in Tier 4?

Tier 4: Which areas could enter Tier 4 next? (Image: GETTY)

Now Communities Secretary Robert Jenrick has acknowledged “it may be necessary to take further action” to curb rising case numbers.

The Cabinet’s Covid operations committee is meeting on Wednesday to consider the latest data on the spread of the virus.

Labour leader Sir Keir Starmer has written to Prime Minister Boris Johnson to say his party will back any Government moves to tighten restrictions if that is what scientists recommend.

Tier 4: Areas were plunged into Tier 4 on Sunday (Image: EXPRESS)

Which areas could enter Tier 4 next?

There has been speculation the UK could be placed under stricter measures and potentially even a third national lockdown on Boxing Day.

Health Secretary Matt Hancock is due to give an address from Downing Street at 3pm today.

According to the latest data, the rate of new cases of Covid-19 is rising in nine out of 10 local authorities across England.

The latest R-number for the UK is believed to be up slightly compared to last week when it was estimated to be between 1.1 and 1.2.

Some parts of the country may soon see a change to their alert level.

One area which could move up to Tier 4 is Birmingham, with reports local leaders and health officials in the city met on Tuesday night for discussions.

Other areas currently in Tier 2 could face moving to Tier 3 as the UK grapples with the mutated coronavirus strain.

The current tier levels in England are due to be reviewed on December 30 but this could be brought forward.

The south-east of England is currently split between Tier 4 and Tier 2, with the Isle of Wight alone in Tier 1.

But while a number of counties are entirely within one tier, others are split between different tiers and many local areas in Tier 2 share borders with those in Tier 4.

This has caused anger and confusion from residents who won’t be able to see family in neighbouring tiers despite being just minutes away.

In East Sussex, Wealden is currently in Tier 2, while neighbouring Rother is in Tier 4.

Based on the data Wealden seems likely to be moved up a tier, possibly along with those other parts of East Sussex which are still in Tier 2 such as Brighton & Hove, Eastbourne and Lewes where rates are also rising.

Gosport, Havant and Portsmouth are already in Tier 4, though rates in Gosport are lower (currently 165.0).

The rest of Hampshire has similarly low rates and may stay in Tier 2.

Mr Jenrick told Sky News: “We don’t have a timetable for that. The Government’s Covid operations committee is meeting later today to review further evidence.

“We keep this under review, we are constantly hearing from our scientific advisers about what we should do.”

Mr Jenrick said the mutation “is very concentrated in London and the South East”, where full lockdown measures are already imposed.

He said: “We’ve now had time to think again about whether further action is required in other parts of the country, and that’s the decision the prime minister and other ministers will need to take in the next couple of days.”

Health officials in Cumbria have said the variant is in the county and may be the reason for a steep increase in cases there.

Lancashire’s director of public health has said there is a “high likelihood” the mutated strain is in the county.

The mutated coronavirus strain is rapidly replacing other versions of the virus and is highly contagious.

Genomic researchers have found the new variant has also spread to Wales and Scotland.

Professor Neil Ferguson told the Commons Science and Technology Committee the new strain of coronavirus is “everywhere now”, but said he anticipated the impact of new Tier 4 restrictions and revised strict measures over Christmas elsewhere would have a beneficial impact.

He said: “Schools are now shut, we are in a near-lockdown situation across the country.

“I expect, though I hesitate to make any sort of predictions, we will see a flattening of the curve in the next two weeks. We will see at least a slowing of growth.

“The critical question is what happens in January and the extent we want to make public health measures more uniform across the country if the new variant is everywhere.”