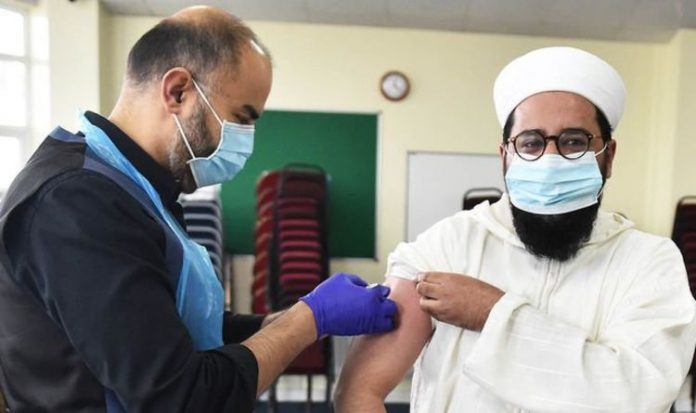 The UK’s coronavirus vaccination programme will receive a boost of an extra £1.65bn in the Budget to reach its target of offering the first dose to every adult by July 31. This announcement came as the UK surpassed the 20 million mark for those who have received the first dose of the vaccine. But will the vaccine rollout have to slow massively in the coming weeks as second doses are ramped up?

The UK Government confirmed 20,089,551 people had received the first dose of the vaccine up to and including February 27, with a further 796,132 having received the second dose as well.

Over-40s will start being called for jabs this month, with almost four in 10 adults having now received the vaccine.

Health officials are sending out the last batch of invitations to those over the age of 60 from today.

NHS England said the latest batch of invitations will mean everyone in the first seven priority groups, including everyone over 60 and younger people with underlying health conditions or factors that make them clinically vulnerable, will have been offered a Covid vaccine.

The programme will then be offered to five million people in their 50s, as well as those aged 16-64 with certain underlying health conditions, with the Government aiming to begin this phase by April 15.

READ MORE: Covid vaccine: The six side effects you might have after jab

However, there is a large discrepancy between the rate of first and second doses being given.

The injection of an extra £1.6bn is likely designed to help keep the current momentum with the first jabs, whilst undertaking the required second doses once they are required.

Dr Tomar said: “ With the rollout of the administration of the second dose this may change the current model of working both for the NHS and the patients.

“Till now each site is given a date on which a set number of vaccines will arrive, and our staff contact patients in the high-risk groups to book them in.

“Patients have been told they will be contacted if they are in the current eligible group.

“However, for patients within these groups not registered with a GP, we will be asking them to self-present if missed as we move to the next cohort of slightly lower risk patients.

“As we approach the 12-week timeframe in which it is important ALL patients receive their second dose (evidence from the research into effectiveness) some of these doses will be pre-allocated for those patients approaching this timeframe meaning there may be a reduced number of vaccines to give as first doses.

But it is not only the number of people requiring vaccines generally which will provide a challenge but in fact, the type of vaccine given for the first dose could also cause delays.

Dr Tomar added: “This is further complicated again from personal experience when the initial vaccines provided were Pfizer and now we are able to give AZ, patients can not yet mix and match for their second vaccination.

“These added layers of complexity from booking unregistered patients, different vaccines not yet being combinable, and adding second dose re-calls to first the dose push would logically suggest there may be a drop in delivery speed.

“But knowing my fellow primary care colleagues, they will overcome this as they have all hurdles so far.”

When asked about which population groups are most at risk with any delays to the vaccine rollout, Dr Tomar identified BAME communities as those at the highest risk.

He said: “From national statistics, it has already become apparent that certain population groups have a lower uptake of the first dose of the vaccination let alone the second dose.

“Unfortunately, it is shown that the BAME group who are at the highest risk are those also showing the lowest vaccination uptake.

“At Portland Medical we have used local BAME public figures and social media groups to focus our efforts on reaching out to these populations and dispelling fake news and myths around the various vaccines.

“As word spreads of some of the expected side effects of the vaccine (as with most vaccines – temperature, muscle ache, fatigue), patients may be put off having the second dose especially as it is possible the second dose produces a stronger immune response and thus stronger side effects than the first.

“My answer to that, as I give to all my patients, is that this is worth it!

“Not only is it better to have the minor side effects of a vaccine compared to having COVID-19 but it is also much better than catching it and passing it on to your family who may be at an even higher risk than yourself.”

The GP added complexities will increase as the UK continues its vaccination efforts.

Dr Tomar said: “Overall, the NHS has done a remarkable job rolling out the vaccination programme and this remains the true path to an end to lockdowns.

“The complexities of the vaccination programme will increase with time but the NHS will rise to this challenge.

“All we can ask is that the UK population takes the vaccine when offered, takes the second dose within 12 weeks and don’t pay any heed to the myths and fake news surrounding their safety.”