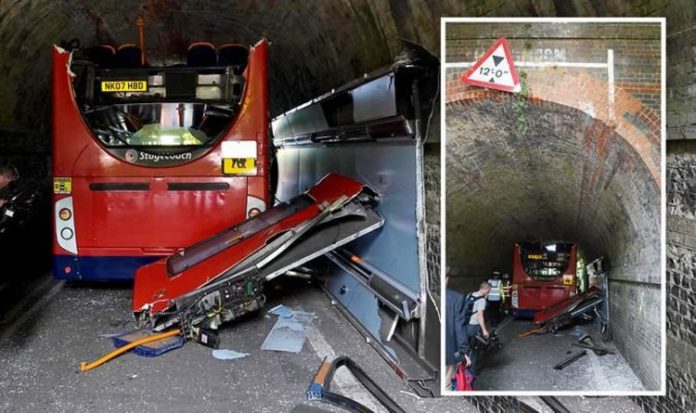 The roof of the double decker bus was said to be “sheared completely off” in the horror crash in Well House Lane at 8.12am this morning. Hampshire Police said pupils from Henry Beaufort School, aged between 11 and 16-years-old, were taken to hospital with serious injuries.

A Hampshire Police spokesman said: “We were called at 8.10am today, 10 September, to reports of a serious collision on Well House Lane, Winchester, after a school bus collided with a railway bridge causing significant damage to the top of the bus.

“Three students with serious, but not life-threatening injuries, have been taken to hospital.

“A further 13 students with minor injuries have been dealt with at the scene.

“All the students involved are aged between 11 and 16. A road closure is in place on Well House Lane from the junction with Andover Road North to School Lane to enable us to deal with this incident.

“We are working in cooperation with the school and Hampshire County Council children’s services to provide support to the students and their parents.”

A Hampshire Fire and Rescue Service spokesman said: “Crews from Winchester, Eastleigh, Andover, Redbridge and Basingstoke were mobilised at 08:12 this morning to Well House Lane in Winchester.”

Zoe Kierans, one of the pupils travelling on the bus on the top deck, described the “crazy” scenes of panic.

She told BBC News: “I think we were going the wrong route, but nobody really noticed. Suddently it just hit the top of the bus.

“It just felt ike a complete shock, it was just so out of the blue. It felt like a sudden ‘am I going to live or die?’ you know that kind of panic.”

She told how “everyone was crying and shaking, people were being sat down and helped, it was just a huge shock and panic”.

Hants Road Policing tweeted: “We are dealing with a serious collision on Well House Lane, Winchester, after a school bus collided with a railway bridge.

“There are no life-threatening injuries.

“A road closure is in place on Well House Lane from Andover Road North to School Lane. Thank you for your patience.”

Winchester City Councillor Jane Rutter posted Twitter: “Just had a report that a double decker bus has managed to lodge itself under the railway bridge in Wellhouse Lane, Headbourne Worthy.

“Emergency services have been called. Please avoid if possible.”

Parents have been collecting their children.

Well House Lane is closed in both directions from B3420 Andover Road North to Springvale Road.

Johnny Greenwood, deputy editor at BBC News, tweeted: “A number of children have been taken to hospital with injuries after a school bus hit a railway bridge in #Winchester.

“The roof of the bus was sheared completely off in the incident – told none of the injuries are life threatening though some are serious.”