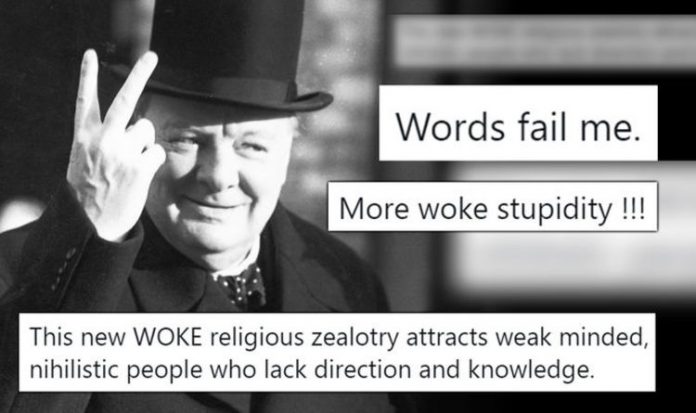 A multicoloured mural of Churchill wearing stockings and suspenders while issuing his famous trademark with his right-hand sparked offence from members of the public in the city. Painted on the Sandpiper guesthouse, in Cannon Place, passers-by complained to Brighton and Hove City council they found the gesture offensive. The council then notified the owner informing him of the offence, despite the gesture being made famous to denote victory.

Commenting on the story, some pointed to their outrage over yet further “woke stupidity”.

A third said: “Words fail me.”

In his famous gesture, Churchill usually performed the sign palm out.

He had previously performed it in the reverse before discovering it to be offensive.

The owner of the guesthouse, however, was surprised the gesture was found offensive as opposed to the UK’s famous Prime Minister wearing stockings.

In the mural, Churchill is wearing stockings and is near-naked on the bottom half.

JUST IN: Brexit LIVE: Rishi Sunak promises to walk away with no deal

“This is Brighton after all, and it’s better than having graffiti on the wall.

“The council said someone would come over to paint over the hands, which would look really bad.

“They called me half an hour later and apologised and said it was going to stay.”

Brighton and Hove City Council later confirmed the mural had been found to be historically authentic.

Due to this, the mural has been allowed to remain on the side of the guesthouse.

The designer of the mural, Horace, said he too was surprised by the offence caused by the gesture.