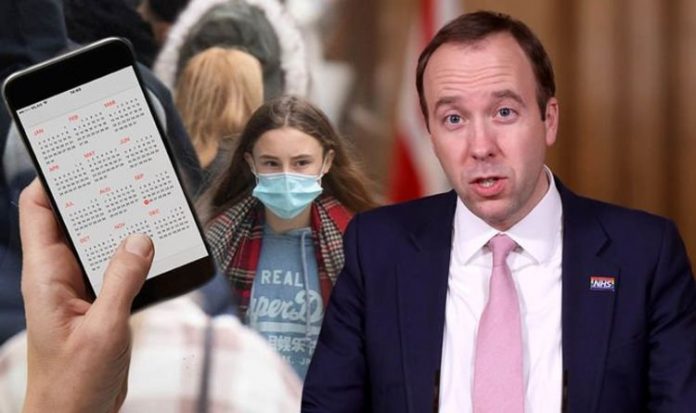 Current plans being mooted include a lifting of restrictions from December 22 to December 28 – a seven day break to allow families to get together this Christmas. Under the proposals, up to three households could form a temporary bubble in order to celebrate the festive period together. Church services could be allowed to go ahead, after being reduced to private prayer only, and bars and restaurants could be allowed to open.

The plans could cover all four nations of the UK, according to reports. But there are concerns this break in the rules could cause covid cases to spike once again.

Director Dr Susan Hopkins said that the Government’s Scientific Advisory Group for Emergencies (Sage) has previously suggested that for every day we release the lockdown rules, we will need five days of tighter restrictions.

But the senior medical advisor warned the current plans could result in the UK needing a further 35 days of lockdown in order to compensate for this.

She said: “Coming into Christmas we need to be very careful about the number of contacts we have to reduce transmission before Christmas and get our cases as low as possible.

“Hopefully the Government will make the decision that will allow us to have some mixing… and once we have got past the Christmas period, if there has been some release and some socialisation, we will all have to be very responsible and reduce those contacts again.”

READ MORE: Would you sacrifice Christmas not to be locked down in January? – POLL

She added: “We are very keen that we have a Christmas as close to normal as possible.”

“That requires all of us to make every effort over this national restriction period and even in early December to get the cases as low as possible and to reduce the risk of transmission within households and between families.

“A final decision will rest with the Government and we look forward to hearing what those plans are.”

Professor Jonathon Van-Tam played down suggestions from Public Health, however, saying there are “no magic numbers” for predicting the scale of the impact.

He warned infection rates will pick up again if the public ignores guidelines, adding: “If people don’t (follow the guidelines) then the first scientific principle is things will go back up again. There is dual responsibility here.”

Welsh First Minister Mark Drakeford added: “We agreed some broad parameters on Wednesday and remitted officials of all four administrations to work now on the detail, so I remain hopeful that it will be possible to reach a four-nation approach to Christmas.

“I certainly think that is the right thing to do – if it is achievable – and certainly Wales will be at the table next week looking to find an agreement.”

Dr Julian Tang, of the University of Leicester, said it was important to try and ensure people have a Christmas this year for their mental health.

He said: “If we can keep homes as well-ventilated and protect granny and grandad as much as possible, then some sort of limited Christmas may be possible.”

But he, too, warned not to expect a ‘back to normal’ Christmas. He added: “Very starkly, the virus will inevitably spread over Christmas if there are more frequent contacts, within multigenerational family gatherings, from different households, from different parts of the country, for longer durations, in crowded home environments.”