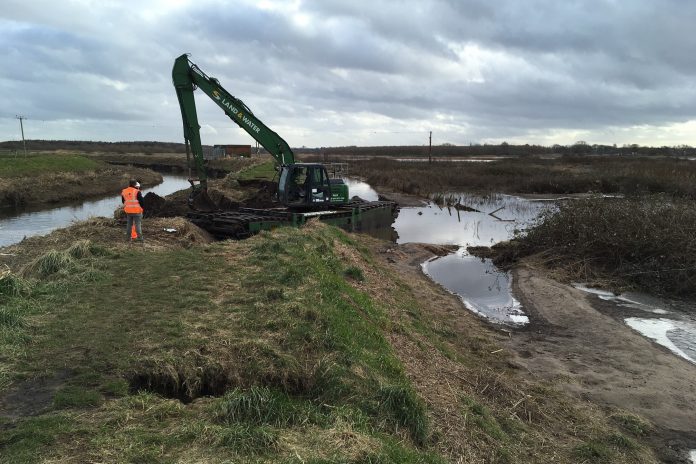 Work to repair an embankment on the River Alt at Lunt meadows Nature Reserve and flood storage area has begun as part of the Environment Agency’s programme of recovery to last month’s floods.

The river burst its bank on 20 January during significant and severe rainfall caused by Storm Christoph which also saw the Environment Agency issue two Severe Flood Warnings in Maghull, covering 439 properties within the flood warning area.

While water levels did rise quickly, the breach allowed the nearby flood storage area at Lunt Meadows to hold the excess flows.  Alongside additional pumping, the breach appears to have been key in preventing major problems in nearby Maghull.

Lunt Meadows has been designed to act as both a flood storage area for downstream communities and a nature reserve, providing wetland habitats for species, such as water vole, marsh harrier and kingfisher, while also holding excess rain and river water

When the flood storage area is full, water is then slowly released back into the River Alt, taking the pressure off the river system and reducing the likelihood of flooding in more built-up, urban areas. During Storm Christoph, the embankment separating Lunt Meadows from the River Alt was badly damaged by the pressure of the water.

Officers from the Environment Agency have undertaken on-site inspections to ensure the repair works do not cause any risk to the local wildlife on the nature reserve.

During Storm Christoph we worked successfully with emergency responders and partner organisations including United Utilities, Sefton Council and Lancashire Wildlife Trust, in response to what was forecast to be the heaviest rainfall for decades.

“Thankfully, on this occasion, the flood storage area at Lunt Meadows absorbed the excess flows.

“While our emergency response to this incident has now been stood down, the repair to the damage on one of the River Alt’s embankments is now our top priority. This will allow us to fully restore the protection offered by the flood storage area.

“We fully appreciate the impact incidents like these have on people and we will continue to work alongside our partners to bring these repair works to a positive conclusion. We do encourage members of the community not to try and attend the site while works are taking place as there will be a large amount of heavy plant machinery operation in progress.”