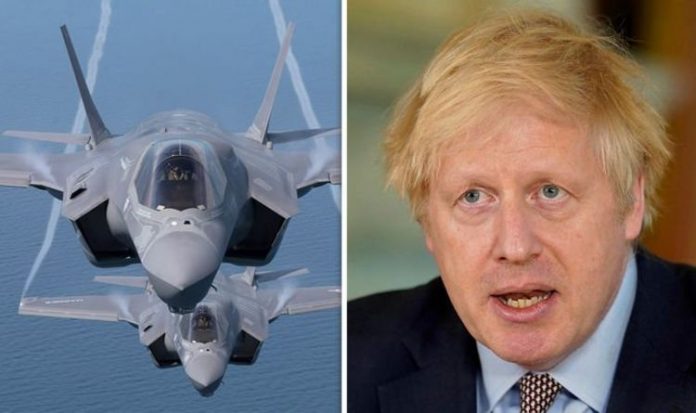 The UK had planned to buy 138 of the new vertical landing jets from a US company. Many of these would be deployed on the HMS Queen Elizabeth and HMS Prince of Wales, Britain’s two new aircraft carriers.

However according to a report in The Times this number could be sharply reduced.

The UK is only formally committed to buying 48 F35B Lighting II jets by 2025.

There is speculation the final number purchased could be around 70 which would allow for 60 operational aircraft as well as ten as backups.

This is a big reduction in the number recommended in the UK 2015 defence review.

Instead the money could reportedly be invested into developing the Tempest jet which is expected to enter production by 2035.

This next generation warplane would be able to operate remotely without a pilot should the situation require.

It will also control a swarm of drones, nicknamed its ‘loyal wingmen’, which can be used to attack enemy targets.

Development of the Tempest is being led by the UK with Italy also involved.

READ MORE: Erdogan FURY at US refusal to deliver F-35s – ‘It’s a robbery!’

Speaking about the project in 2018 then Defence Secretary Gavin Williamson said: “Tempest is going to be a future jet fighter that will take the RAF to an ever greater height.

“If the RAF is to have the capability to keep Britain safe and make sure we can defeat our adversaries at home and abroad, we need to be making this investment in a fighter jet.

“We have been a world leader in the combat air sector for a century, with an enviable array of skills and technology, and this Strategy makes clear that we are determined to make sure it stays that way.

“It shows our allies that we are open to working together to protect the skies in an increasingly threatening future – and this concept model is just a glimpse into what the future could look like.”

The final decision on how many F35B Lighting II jets Britain buys is expected to be influenced by the foreign defence and security review which completes in November.

Speaking to The Times, a defence source said: “The guiding principle of the review is to ask ourselves what the threat it, and whether we have the capability to meet it.”

However Tobias Ellwood, Tory MP and chair of the Commons defence select committee, raised concerns about the proposed cut.

He warned: “We can’t keep eroding out spectrum of capability in this way.”

Separately there are reports the British Army’s entire tank fleet could be scrapped.

Sweeping defence cuts are expected to address damage caused by the COVID-19 crisis.

Some of the money that was going to be spent on tanks would instead be invested into cyberwar and aerial capabilities.

He said: “This Government has shown time and time again that it lacks the strategy and competence needed to maintain our national defences, with little to show from a decade in power other than a shortage of troops and an equipment funding black hole.

“The Secretary of State must make a credible assessment of Britain’s defence requirements based on a full consultation with military chiefs and stakeholders. Britain simply cannot afford for ministers to pursue pet projects or repeat the past mistakes of knee-jerk cuts to defence assets.”