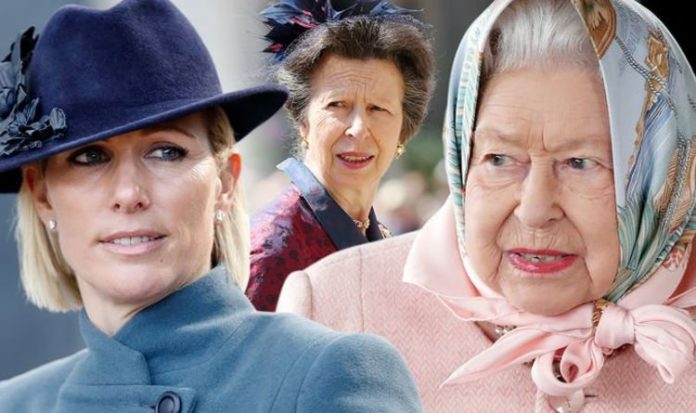 Zara is the daughter of Princess Anne and the granddaughter of Her Majesty the Queen. Despite her being so close to the Queen and the family’s inner circle, Zara has not attracted the same level of public attraction as Prince Harry, Prince William, Princess Eugenie or Princess Beatrice. This is because unlike her cousins, Zara is without a royal title.

Anne and her then husband Mark Phillips decided that their children’s lives would be better off without the baggage that comes with royal status.

Both Zara and her brother Peter Phillips have since said that their lack of royal title, added to the work ethic instilled in them by their mother, has led to their professional drive and hard work towards individual careers.

Zara has been particularly candid about her joy at her lack of royal title, as she reiterated during a 2015 interview with New Zealand’s 1 News.

When asked about her life, she admitted: “Me and my brother both had a great life growing up because we didn’t have our titles.”

Not having a title while most of your family does must, many have speculated, mean a lot to the royal.

Yet, as Zara explained: “I think my life’s just more normal – a more normal way of growing up.

“We’re lucky that we’ve got some great friends all over the world.

“We’ve been able to travel and fit in and be able to do normal things.

“Also having Mia – it’s great to be able to do them both so closely.

The interview was followed by Zara’s appearance at an evening charity event.

She had flown to New Zealand specifically to talk at the fundraiser held by the CatWalkTrust.

Founded by former champion rider Catriona Williams. who became a tetraplegic after a horse riding accident in 2005, Zara looked to show her support for her fellow and former athletes who had been affected by life-changing injuries.

Zara is herself a decorated horse rider, having won a silver medal at the 2012 Olympic games.

Despite not bearing a royal title, she is still entitled to the throne.

This will, however, move down a space upon the arrival of Eugenie’s baby next year.

Zara and her brother will move down to 19th and 16th respectively.