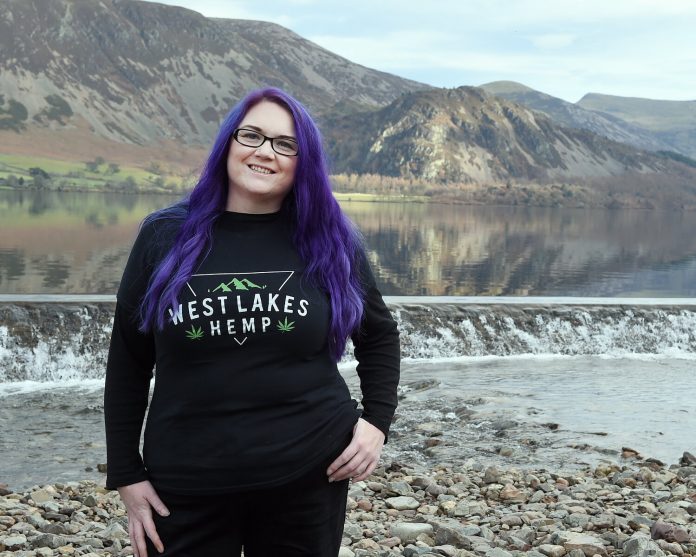 Five Years On From Storm Desmond – “Rising from the ashes to set up a business which helped save my life.”

A businesswoman who was left on the brink of suicide following the Storm Desmond floods which struck Cumbria in 2015 says setting up her own business helped save her life.

Five years on from the floods, Nic is running West Lakes Hemp; Cumbria’s only retailer selling CBD products. Nic, 33, who lives in Seaton, near Workington, Cumbria, was diagnosed with Bipolar Type II in her teens and a Borderline Personality Disorder in her twenties.

She hid her mental health conditions from her friends and family for most of her life, until she had a majorepisode in 2015.

During Storm Desmond in December of that year her then-home in Carlisle flooded and she was unable to go to work at the city’s Youth Zone, which was also damaged.

“I noticed the water coming down at 10pm on Saturday 5th, between midnight and 2am it kept coming and coming,” said Nic.

“There was no stopping it. At 4.30am I managed to get to bed and got a couple of hours sleep, to be then woken up by the rescue boat and emergency teams outside. The water was above the ground-floor door and a foot off the top window. It must have been 8ft.

“I was terrified. Everything happened so quickly. When the RNLI told me that it was time to go, I had to grab what clothes I could and couldn’t stop for anything. I was dropped off on Peter Street in my jamas. I couldn’t get back to West Cumbria, where my parents live because all the roads were blocked, and the trains weren’t running. So, I walked to Wetherspoons, got a cuppa and I broke down.”

She found herself at rock bottom, on constant suicide watch back at her parents’ house and working with the local psych team and community mental health team.

“When Storm Desmond hit, it felt like the end, I was considering taking my own life,” she said.

“I had to move in with my mum and dad and they had to keep coming to check on me to make sure I was still breathing. It was a black hole. I couldn’t get out of bed and I didn’t want to speak to anyone.

“I was constantly telling myself I was useless and worthless and questioning whether I even deserved to be in the world. It takes you to some very dark places.

“Before I took antidepressants and anti-epileptic medication to stop the cycle of bipolar. I found that the antidepressants allowed me to function, but they left me feeling emotionally numb.”

The family turned to a psychiatrist friend in America, who suggested she tried using CBD.

CBD is a food supplement which contains the legal substance cannabidiol. When cannabis is taken as an illegal drug it is the compound tetrahydrocannabinol (THC) which creates the sensation of being “high”. However, CBD is not psychoactive and a number of studies have found it may relieve physical pain and help combat mental health issues.

After using CBD as a last resort Nic very quickly became aware of the benefits and realised that others could benefit too.

She also realised that after losing previous jobs one of her options was to start her own business, which would allow her to manage her mental health and work at the same time.

This is when she started West Lakes Hemp with long-term schoolfriend Luke Woodend.

She adds: “I truly believe that my business helped me in more ways than one. As a business it helped me focus on something when I once again hit rock bottom; it got me back into the office, back into working with the public and I was able to support people with mental and physical issues without it having a damaging effect on my own mental health I was able to share my story and encourage others to seek support.

“For me, my business along with CBD was my lifeline and I am proud to be able to provide and supply to those who may also benefit from it. I wouldn’t sell products that I didn’t believe in or would cause harm. I give our products to my family and my friends. We aim for quality, transparency, and consistency.

“Life is full of peaks of troughs. With having bipolar and borderline personality disorder the peaks are high and the troughs are extremely low but with my business and family helping me along the way, I have no doubt that I can succeed.”