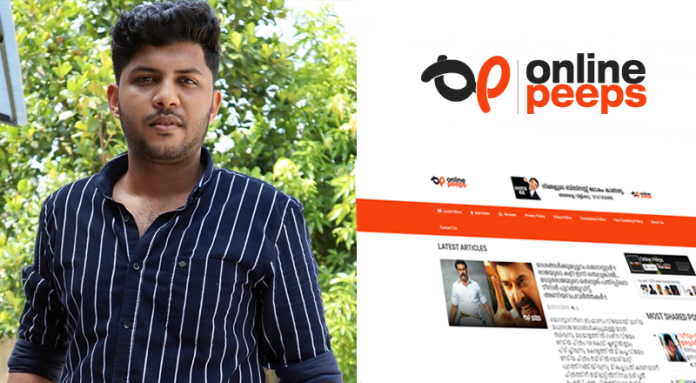 Meet Muhammed Abdul Kalam, Admin of Online Peeps who dropped his college for his Facebook page.

Do you believe a guy dropped his college for to use Facebook and Instagram? Yes, You should.

Meet Mr.Muhammed Abdul Kalam from Kerala, South India has conquered his own space on the entertainment news portals. With a number of 7 working staffs, currently, his page Online Peeps has reached a count of half a million people on Facebook alone and around 275k on Instagram. Muhammed Abdul Kalam’s story proves that you always don’t need the money and support to fulfill your dreams; hard work and diligence are enough. Kalam has started his Facebook page “Online Peeps” in the year 2012 and started to gain more and more knowledge the same that includes increasing the traffic on the page and other marketing ways. He has researched it on YouTube and other various other platforms and gathered all the necessary information. He ed other admins of the Facebook page to get some knowledge, but no one attended the request of this guy seriously. As a result, he got demotivated. He neither had the funds nor much knowledge but he motivated himself again with the belief that,

“Once you have the determination to do something, the doors of success will automatically get opened for you.”

Kalam started providing Digital Marketing services to several clients located in Kerala and around the globe. After a few deals, he has sufficient funds to start again. He began researching and found that everybody is busy in grabbing the “Elite Audience” and no one is interested in the Rural and Malayalam Speaking audience. After gaining a large amount of traffic on his entertainment categorized page, he decided to monetize it. The idea of monetization has resulted in great success, and he started earning a good and stable income then. His family became furious, and they thought that their son had caught himself into something illegal, and they started convincing him to stop all his online pages and focus on studies. But, he didn’t quit and convinced his parents to believe that Digital Marketing is not a real thing. Slowly, his family started supporting him. He started researching more and more untapped niches.

Right now Online Peeps has more than 5 lakh followers on Facebook, around 3 lakh daily news readers on the official website, Facebook and dailyhunt as well.Online Peeps have 275k Followers on Instagram and 20k subscribers on YouTube. Kalam is now focusing more on videos as Facebook is promoting videos more. He adds that if you are an admin and you’re not planning for videos, you’re missing a lot.” Till date he has worked with many big brands like Tata Docomo, Seematti, Akbar Travels, Western Union, and a few shows and movies. He has also planning to launch a new portal where people can get updates of cooking recipes. He named it “Foodie Peeps” and owns a Trademark and Copyrights for the same.