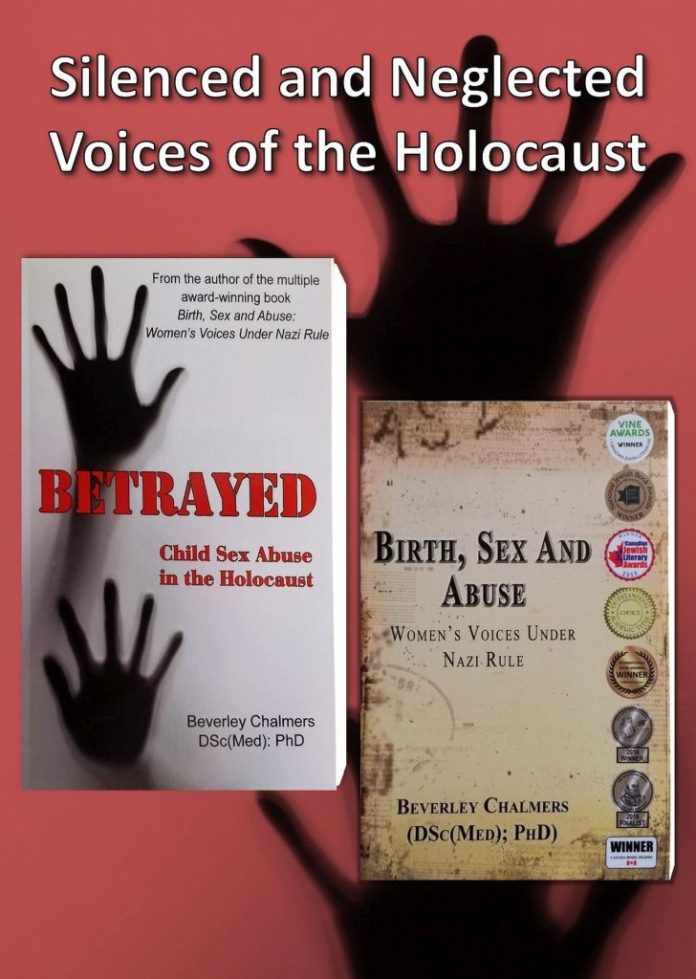 Two Finalist awards since publication only a few months ago

This book is an unique exposé of birth, sex and abuse of both Jewish and non-Jewish women during the Nazi era.   Based on twelve years of study of women’s history during the Holocaust, it is a cutting-edge account of what women themselves said, thought and did. “Birth, Sex and Abuse: Women’s Voices Under Nazi Rule” was awarded the USA National Jewish Book Award, the Canadian Vine Award for Jewish Literature, a CHOICE ‘Outstanding Academic Title’ Award, and a Canadian Jewish Literary Award, amongst many other distinguished awards.

This ground-breaking book exposes a taboo aspect of Holocaust history: the sexual abuse of children. Children were sexually assaulted in ghettos, camps, on transit trains, while in hiding, and even when sent to supposed safety outside Europe.  Children were assaulted by rescuers and peers who took advantage of their vulnerability.  After the war, they were betrayed both by those who discounted their experiences, and by Holocaust scholars who refuse to acknowledge their stories or give credence to their memories.

Dr Beverley Chalmers has dedicated her life to studying women’s and children’s experiences in difficult social, political, economic and religious settings.  She has held professorial appointments in Faculties of both Medicine and Social Sciences and served for decades as a maternal and child health consultant to numerous United Nations and other global health agencies.  Her inter-disciplinary focus and extensive international research and experience provide a unique perspective on the Nazi era and on the Holocaust.

“Sexual abuse was one of the many horrors that some children were forced to endure during the Holocaust. But their stories deserve to be told.

‘Betrayed’ is a well-written and researched, albeit difficult, read that gives these victims a voice to be heard.”

“Chalmers shows that children were sexually abused not only by people related to the occupying forces or by hostile strangers, but also by others, including some of their very protectors. Chalmers puts the children and their suffering in the center and makes their voices – their cries – heard; by doing so, she creates a wider awareness of this dreadful phenomenon, awareness that is crucial to anyone who wishes to build a better world for our children.”

Birth, Sex and Abuse:  Women’s Voices Under Nazi Rule and Betrayed:  Child Sex Abuse in the Holocaust are available from all major international booksellers including Amazon.