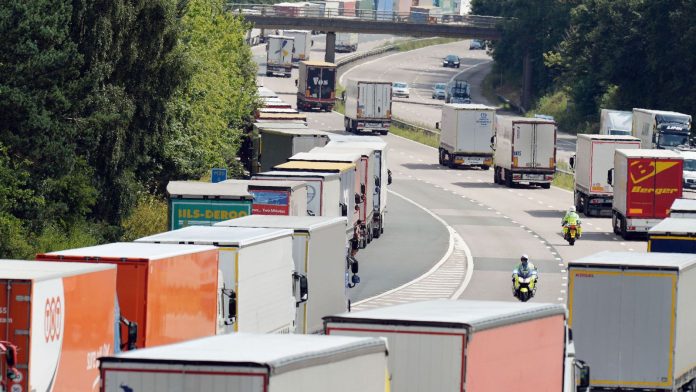 The government’s “temporary solution” to potential traffic chaos on Kent’s roads after Brexit will have to last “many years” as a permanent solution will not be in place until “2023 at the earliest”, Sky News can reveal.

According to internal Brexit impact reports from two Conservative-run local councils, the conversion of four lanes of the M20 motorway into a 13-mile (20km) long lorry park could be in place for a number of years after the UK’s departure from the EU.

The first preparations for the scheme, known as Operation Brock, have just begun, with hard shoulders about to be strengthened to sustain the weight of hundreds of parked articulated lorries.

Such a scenario is anticipated should either the Channel Tunnel or cross-Channel ferry routes see new customs or regulatory checks after Brexit.

In the internal Brexit impact report from Dover District Council, obtained by Sky News, some exasperation is expressed at the slow pace of central government preparedness.

This includes the lack of long-planned permanent lorry parks as an alternative to Operation Stack, which led to widespread disruption in Kent after disruption in Calais in 2015.

A “permanent solution will not be in place for many years… the ‘temporary’ traffic-management system Operation Brock will be in force for some time”, writes the council in the report from last month.

In a separate report, on the same subject, from Kent County Council, it is anticipated the planning application for a major permanent lorry park will not even be considered until next year “and will not be delivered until 2023 at the earliest”.

Kent County Council has told the government this “is not only frustrating but potentially damaging to the UK economy as well as disrupting the daily life of Kent residents and visitors”.

Operation Brock involves the four lanes of the southbound carriageway of a 13-mile stretch of the M20, between Maidstone and Ashford, being converted into a lorry park for 2,000 vehicles.

The northbound carriageway will then have a contraflow system of two lanes each for ordinary traffic in both directions.

The government has suggested the need for this disruption is not part of its Brexit plans, and the UK’s departure from the EU was not mentioned in the written statement announcing the plan or the consultation document.

This does not appear to be correct, however.

Local businesses have been told it will take up to two weeks to activate the plan, unlike the few minutes Operation Stack requires following news of disruption in Calais.

The only plausible use for such a system is in anticipation of a structural increase in customs and regulatory checks at the UK border following Brexit in March next year.

Kent County Council also point out in its report that “Brock” stands for “Brexit Operations Across Kent”.

Local industry sources claim privately that the government did not want its plans for a potential “no deal” Brexit associated with the need to turn a large swathe of the main motorway link with the Continent into a lorry park.

Both councils are concerned about whether it will be delivered on time. It needs to be delivered before any potential change to customs arrangements in March 2019.

The Dover report states “there does not appear to be a plan B”.

Meanwhile, Kent County Council says it is “concerned” the plans “do not appear to be far enough advanced to be ready in time for the UK’s exit from the EU” and the scheme, in any case, will still cause “massive disruption to both strategic and local traffic”.

This is the basis of some of the warnings from government in recent days about the risk to food supplies and the need to stockpile medicines, medical devices and blood plasma products.

The Dover document is especially important because the council is the Port Health Authority responsible for food safety checks required post-Brexit at the Port of Dover and the Channel Tunnel.

The report questions whether it is “fully understood” by central government that the Port Health Authority will not have powers “to physically stop vehicles”; that officials “in the large are blind as to what is entering the port”; the layout of the port means there is “nothing to stop vehicles leaving” Dover; there are “inadequate facilities to inspect and store food” and “no facilities to park vehicles waiting for examination”.

Such checks have not occurred since 1992 at these sites and there is a shortage of vets to provide them.

The government hopes its Chequers plan for Brexit, including a common rulebook for goods and agri-food, will avoid the need to instigate new border checks.

But they will be difficult to avoid in a no deal scenario, and the EU has vowed to enforce them; even if – as Sky News reported earlier this year – the government’s secret plan is to waive almost all such checks on goods coming in to the UK.

The Dover report expresses some uncertainty about even in which country such checks will be required.

It says: “Current systems are based on juxtaposed controls being conducted in France and England… once outside the EU such [juxtaposed] controls may cease”.

“We cannot begin to surmise… the substantial workforce required to provide a service at the juxtaposed positions,” it adds.

The government was due to report in detail on its contingencies for a no deal Brexit in the following weeks.

This has been delayed after some public concern over the prospect of Brexit stockpiling, according to government insiders.

Foreign Secretary Jeremy Hunt will visit Paris and Vienna on Tuesday to warn “it is time for the EU to engage with our proposals, or we potentially face the prospect of a no-deal by accident, which would be very challenging for both the UK and EU”.