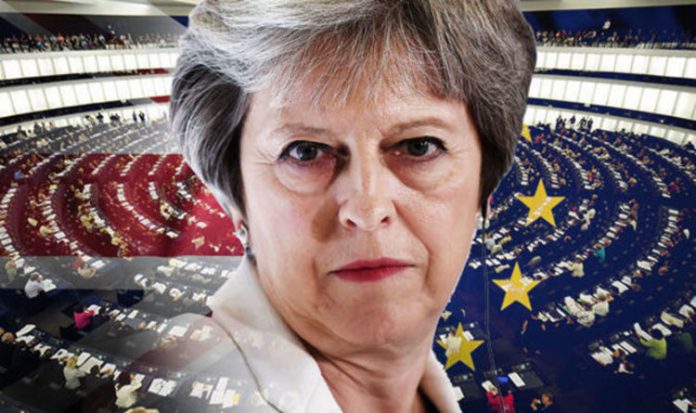 At the first gathering of her Cabinet since her forced reshuffle, the PM told her team every Whitehall department must now be on its mettle.

Brexit-backing Tories hailed the move as “very good news” with former minister David Jones saying: “This should have been done many months ago but it will give a lot of reassurance to British businesses.

“Given the challenges – particularly in respect of freedom of movement of labour – a ‘no deal’ outcome is very possible and it is important that we should be prepared.

It’s very good news that preparations are being speeded up for a ‘no deal’ scenario.”

Mrs May’s message was seen as a challenge to EU chiefs to respond positively to her new Brexit plan, agreed at Chequers on Friday, or she will quit the talks without a departure deal, cancelling the UK’s expected £40billion exit payment.

Her new-look Cabinet put on a show of unity yesterday following the resignations of leading Eurosceptics Boris Johnson and David Davis earlier this week.

Dominic Raab, who has succeeded Mr Davis as EU Exit Secretary, delivered a presentation to the Cabinet on Brexit policy and the preparations for a “no deal” outcome.

At the meeting Mrs May welcomed new Foreign Secretary Jeremy Hunt and Matt Hancock, his replacement as Health Secretary, to their posts.

In a message on Twitter she wrote that it had been a “productive” meeting – as well as sending her best wishes to the England team ahead of tonight’s World Cup clash.

Later Environment Secretary Michael Gove, a leading EU Leave campaigner, insisted he had no intention of following Mr Johnson and Mr Davis out of the Cabinet and said he backed the Prime Minister’s Brexit plans “100 per cent”.

And International Trade Secretary Liam Fox, another longstanding Eurosceptic, was seen to shake his head and mouth the word “No” when reporters asked him if he was about to quit.

But leading backbench Eurosceptic Jacob Rees-Mogg warned Mrs May of the dangers of trying to strike a deal with Labour MPs.

Mr Rees-Mogg, who is the leader of the influential pro-Brexit European Research Group of Tory MPs, said: “If the Government plans to get the Chequers deal through on the back of Labour Party votes, that would be the most divisive thing you could do. And it would be a split coming from the top.”

Tory MP Andrew Bridgen openly called for Mrs May to stand down, saying her Brexit plan was a betrayal of the 2016 EU referendum vote.

In a letter to the 1922 Committee of Tory backbenchers calling for a party leadership contest, he said talks with Europe had turned into “complete capitulation” and that all the promises Mrs May had made were “a pretence and a charade”.

Earlier, Justice Secretary David Gauke risked angering Tory Eurosceptics by signalling that further concessions to Brussels could be on the way.

And Mrs May was hit by two more resignations from her team when MPs Maria Caulfield and Ben Bradley both quit as vice-chairmen of the Conservative Party.

Ms Caulfield, appointed in January to reach out to women voters, wrote to the PM: “I cannot support the direction of travel in the Brexit negotiations which, in my view, do not fully embrace the opportunities that Brexit can provide.

The policy may assuage vested interests, but the voters will find out.”

Mr Bradley wrote to the PM that he understood the Brexit challenges she faced. But he added: “However I have come to the conclusion that I cannot be a spokesman for the party or for Government on this issue and I cannot with any sincerity defend this course to my electorate, 71 per cent of whom voted to leave.”