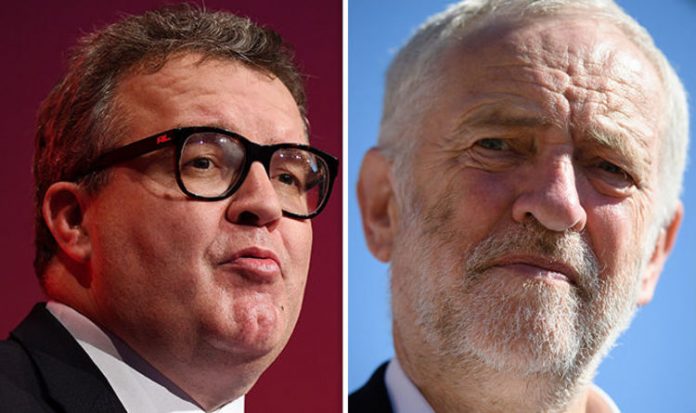 While Mr Watson claimed there was only a small chance of it happening, he said Labour could still support another referendum.

He said it is conceivable there is “no majority in Parliament for any Brexit deal” and if this was the case then the party has to look at all options.

Mr Watson said: “It is highly, highly, highly unlikely we would support a people’s vote but we haven’t taken that off the table because there are a rare set of circumstances where Parliament just can’t make a decision.

“And so you keep your options open.”

The deputy leader added that Labour wanted to work to get the best deal for the UK.

Adding: “Is the current meltdown in the Government good for anyone?

“Obviously electorally it might help my party but we want a good deal because families out there require Parliament to vote on a good deal.”

Labour seemed to have backtracked slightly on its talk of a second referendum recently.

Jeremy Corbyn said he would like a General Election if Theresa May failed to get a deal through Parliament.

But on Sunday the Shadow Brexit Secretary Keir Starmer said Labour would not rule out another second referendum if Parliament voted down a Brexit deal or the UK failed to reach an agreement with the EU.

While he said Labour was not calling for a “people’s vote” on the deal, he said, “the sensible thing is to keep all our options on the table”.

Speaking on the Andrew Marr Show, he added: “Should the Article 50 deal that the Prime Minister brings back be voted down or, worse, there’s no deal, then that’s a very serious situation and we’re going to have to confront it when we get there and that parliament must decide what happens next.”

But Shadow International Trade Secretary Barry Gardiner said: “it is absolutely not our policy to have a second referendum”.

He said the UK’s best interests and the best economic interests are “not the same thing” and the referendum result had to be respected.

Speaking to Sky News, the Labour Peer claimed Parliament should vote down Theresa May’s Brexit deal and call for a second referendum to give Britons the chance to remain in the European Union.

Lord Adonis said: “What I think should happen when we see her deal, given that it’s going to be a betrayal of our economic national interest, jobs, people’s livelihoods, people’s incomes are going to be at stake, the right thing for us to do then is to have a people’s vote.

“A people’s vote with the option to stay in the European Union, which is now profoundly in the economic interest.”