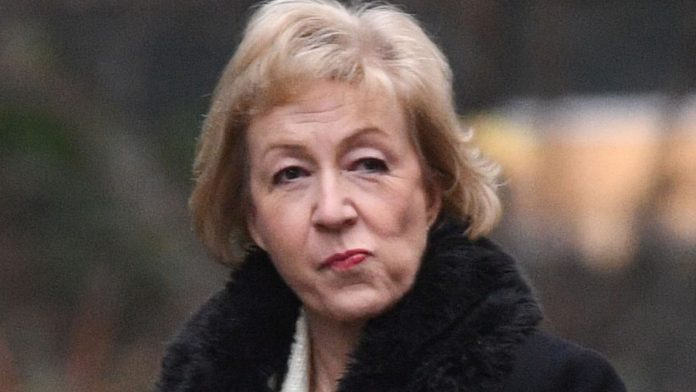 According to a report in The Times, the pro-Leave leader of the Commons also accused a majority of fellow ministers and officials of “arrogance” during the Chequers meeting and claimed they had “Remainer tendencies”.

The paper also claims Mrs Leadsom, who has publicly backed the prime minister since the summit on 6 July, attacked the Treasury’s record on economic forecasting and revealed that some numbers will in future no longer be published.

According to the leak, her private comments during the Chequers summit are in stark contrast to her public statements.

The day after the summit she tweeted that the deal brokered by the PM was “good for the UK”.

The following day she wrote in the Sunday Express: “This is an offer the EU must not refuse and which the country must get behind.”

And three days after the summit she said in an interview: “Theresa is absolutely sticking to delivering the will of the people.”

The leaked minutes confirm a report of the summit in The Sunday Times on 8 July, which said: “When Andrea Leadsom, the Leader of the Commons, spoke she admitted, ‘I hate this’, but made clear to May immediately: ‘I’ll support you no matter what decision you take’.”

Now, according to The Times, the minutes say: “The Leader of the House of Commons said that she hated the proposal and regarded it as a breaching the government’s red lines and not being true to the 17.2 million people who had voted for Brexit.

“Those people had known what they were voting for and the Government could not just congratulate itself on knowing better than them.

“In her view, the majority of both ministers and civil servants had Remainer tendencies and what came with that was an arrogance that they knew better.”

The Times says it understands that Mrs Leadsom is concerned about the accuracy of the minutes taken by officials at the Chequers summit and may request changes to them.

The leaked minutes on her contribution to the summit continue: “This proposal did not look like a Government trying to get the best deal it could – many were already unhappy with where the Government had landed on the European Union (Withdrawal) Act and the implementation period – but she knew that getting the best deal was exactly what the prime minister was trying to do.

“So she would back the proposal, but she appreciated this one opportunity to be frank about her views.”

According to the minutes, Mrs Leadsom also warned: “The Government was on the slippery slope. The Commission would bank this proposition and move on. The only way to counter that was to rule out EEA and talk strongly about ‘no deal’.”

The minutes suggest Mrs Leadsom also called for redrafting of parts of the Brexit white paper “to avoid the accusation of UK become a vassal state or of ‘Brexit in name only’ “.

And on the Treasury and the pro-Remain chancellor Philip Hammond, the minutes continue: “The Leader of the House said that economic forecasts were only ever as good as the factors that were used in them and she would wager a large sum that the Chancellor’s numbers were wrong.

“Others would say they were wrong so it was a massive relief that they would not be published.”