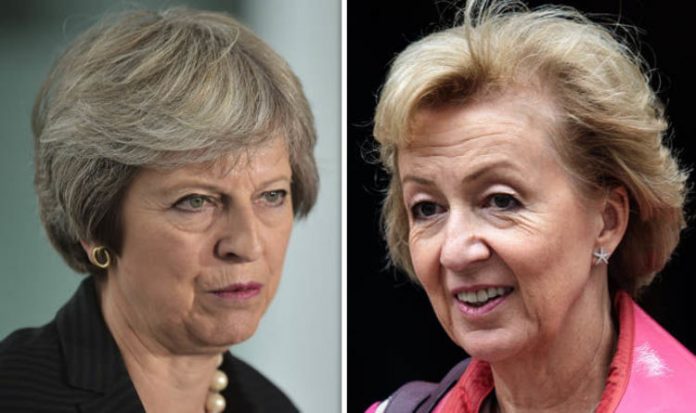 Ms Leadsom, Leader of the House of Commons and arch-Brexiteer, reportedly accused the Cabinet of having “Remainer tendencies” and attacked the deal for failing to deliver on the will of the British electorate.

According to the minutes leaked to The Times, she said: “The Leader of the House of Commons said that she hated the proposal and regarded it as a breaching the Government’s red lines and not being true to the 17.2 million people who had voted for Brexit.

“Those people had known what they were voting for and the Government could not just congratulate itself on knowing better than them.

“In her view, the majority of both minister and civil servants had Remainer tendencies and what came with that was an arrogance that they knew better.”

The minister has nevertheless been accused of hypocrisy by other leading Brexiteer politicians, after voicing her complete support for the deal and maintaining collective responsibility.

Speaking to The House magazine, Ms Leadsom said the White Paper must now be taken seriously or risk a “no deal” Brexit outcome.

She also defended the deal by stating that it does not breach the UK’s red lines in the Brexit negotiations, while attempting to reach a viable compromise with the EU.

Speaking previously on BBC Newsnight, she defended the Chequers deal, stating: “I measure this by what the people of this country voted for, that will always be my yardstick.

“Free movement will end, we will not be paying EU membership fees, we will have back control of our borders and our laws, the ECJ will no longer have jurisdiction over us, we are leaving the customs unions and the single market; we are definitely delivering on Brexit.”

She added that the Government needs to achieve a deal which can “work for the EU as well as the UK”.

However Ms Leadsom warned that the proposals presented by the Government are now final and must be taken “seriously” by the EU.

Speaking to House Magazine she said: “The EU has simply not taken us seriously so far in terms of the future agreement.

“What this deal does is it says to them, ‘right, now we can have a free trading area where there won’t be the need for border checks and controls’.”

In a stark warning to the EU, she said Brussels risks the UK departing with “no deal” if they fail to offer a viable compromise on ongoing issues of contention.

She said: “In my view, it’s take this seriously or we are heading for no deal.

“The message to the EU has to be, ‘this is the final offer’.”

She also warned the UK is “ramping up our no deal preparations” in the event the EU rejects the Governments’ post-Brexit customs proposals.