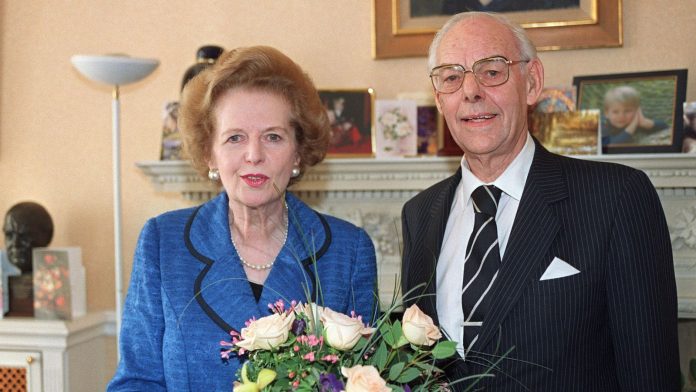 The reception in April 1988 was planned as a thank you to 45 celebrities who attended the Wembley Rally during Mrs Thatcher’s 1987 General Election campaign.

Mrs Thatcher decided more guests were needed and a longer list of “a possible 229 without spouses” was drawn up – including some suggestions from former culture secretary John Whittingdale, then political secretary to the prime minister.

“He was not then the grizzled elder statesman of the present day,” said Chris Collins, of the Margaret Thatcher Foundation. “This was the young man whose evenings were spent watching Meat Loaf at the Hammersmith Odeon.

“His idea of a good party was to invite Paul McCartney, Freddie Mercury, the Jaggers.”

However, Denis Thatcher went through the proposed guest list with a red pen, marking ticks against those he “would personally like to see included” and question marks beside “those who, I believe, do not help”.

In a note to the Private Office, he wrote: “Whilst I accept of course that not everyone who comes to our receptions are necessarily on ‘our’ side I find it both unpleasant and embarrassing to entertain those who publicly insult the PM.

“This list therefore needs some careful checking in this regard.”

He explained that more than one red tick “means super person and a known friend and wonderful to have them here”.

His absolute favourite was comedian Eric Sykes, who got four ticks.

There were also ticks for Rolf Harris, Andrew Lloyd-Webber, Dame Judi Dench, Ronnie Corbett and golfers Tony Jacklin and Nick Faldo, among others.

In the end the longer guest list was dropped in favour of the original 45 plus the Parliamentary Skiing Team and the British Winter Olympics Squad.

The Margaret Thatcher Foundation is gradually overseeing the release of her private files through the Churchill Archive Centre in Cambridge.

Members of the public will be able to browse the archive from Monday by visiting www.margaretthatcher.org.