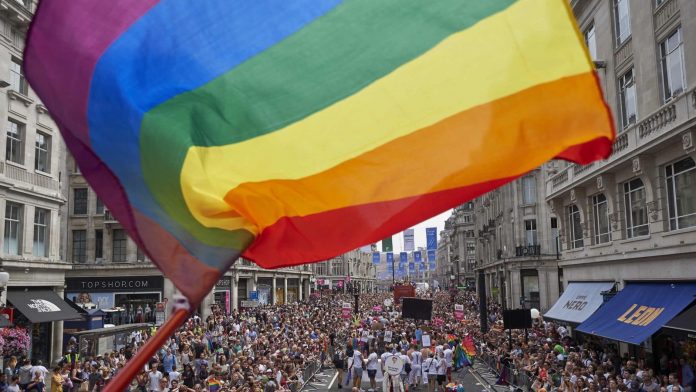 Gay conversion therapies which try to ‘cure’ people’s sexuality will be banned as part of the Government’s LGBT Action Plan.

The plan is an attempt to tackle the inequalities faced by members of the LGBT community.

It comes after a large Government survey assessed some of the difficulties facing LGBT people living in the UK.

Over 108,000 people responded making it the biggest study of its kind in the world.

It highlighted how 2% of those who replied had undergone conversion therapy with a further 5% having been offered it.

The survey also found 68% of same sex couples said they didn’t hold hands in public for fear of facing abuse.

While 51% who had wanted mental healthcare services said they had to wait too long.

Prime Minister Theresa May described the responses as “overwhelming” and “shone a light on the many areas we can improve the lives of LGBT people”.

“No one should ever have to hide who they are or who they love,” she said.

Penny Mordaunt, Women and Equalities minister, whose department was behind the action plan said: “This Government has done much to promote a diverse, tolerant society and supporting lesbian, gay, bisexual and transgender people, but it is clear we have more to do.

“Our action plan is a step towards everyone, regardless of their sexual orientation, gender identity or sex characteristics being able to live safe, happy and healthy lives where they can be themselves without fear of discrimination.

“It will mark a culture change to allow LGBT people to feel respected at every level of society.”

The Action Plan sets out 75 steps to help improve the lives of LGBT people.

:: Measures to end controversial conversion therapies, by looking at legislative and non-legislative changes

:: Extra work with the police to improve how hate crime incidents are responded to

:: More support for teachers and pupils at schools and other education bodies

:: A consultation on whether gender laws should be changed to make it easier for trans people to change their birth certificates

But Labour feels the government could have gone further. Dawn Butler MP Labour’s Shadow Women and Equalities Minister, said: “Much of this plan is yet more reviews and consultations. After years of empty rhetoric and broken promises, we need to see concrete actions to show the Government is serious about tackling the inequalities faced by LGBT+ communities.”

Labour says it would introduce a full legal ban on conversion therapy, and toughen the penalties for those guilty of hate crimes.

Campaigners say the survey results show how action is needed.

Stonewall’s Director of Policy, Paul Twocock, told Sky News: “One of the things we often hear is complacency, we achieved same sex marriage and so much legislative change people feel things are OK, but this survey shows it’s not the case. We need to do a lot to achieve equality.”

Paul Martin OBE, Chief Executive at LGBT Foundation said: “LGBT people continue to face significant health inequalities and we welcome the government’s commitment to tackling these through the appointment of an LGBT Health Adviser.

“We hope that today’s plan is a clear statement of the Government’s commitment to work in partnership with the LGBT charity sector to achieve a fair and equal society where all lesbian, gay, bisexual and trans people can achieve their full potential.