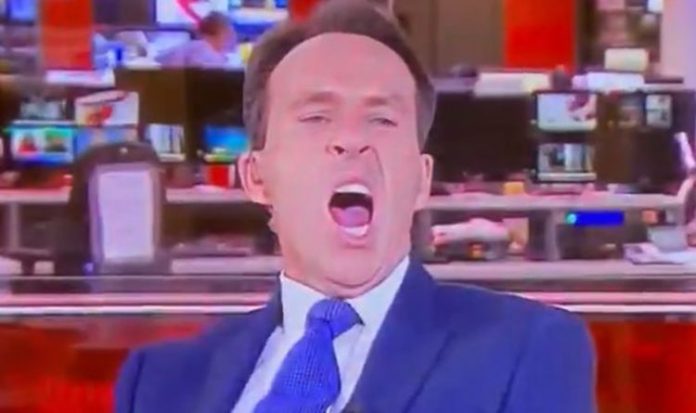 BBC News presenter Ben Brown sparked a frenzied reaction on Twitter after the camera cut to him by mistake. The host was seen leaning back in his chair in the studio, yawning loudly. When he appeared to realise he was on-air, he quickly sat up and began to read his prompt.

She captioned: “Seems like Tier 4 fatigue is getting to the BBC News presenters!”

The BBC presenter himself quote-tweeted the video, writing: “Apologies for this dear viewers.

“I was at the end of a long shift after a 5am start when the director cut to me by mistake. The perils of live TV!”

BBC 5 Live podcast host Scott Bryan sympathised with his colleague, replying: “Ben, no one is blaming you at all.”

Ghausia also responded: “No apologies needed – it was some much-needed light relief from all the news this weekend!”

Andrew Kidd said: “It’s the slow realisation that’s comic. Thanks for the laugh. They are in short supply today.”

Adam Toms joked: “You’ve provided a visual metaphor for mood of the entire nation. No need to apologise, it is being lauded, Ben.”

Tom Hagans replied: “Don’t worry, it gave some of us a good laugh, especially after watching the news!”

Harry Wallace added: “Ben you gave me a smile. Not many this year. Have a good one!”

Maria Stack said: “A very Merry Xmas Ben Brown. I like these moments and they are entertaining in their imperfection and it is not to be apologised…fatigue at the end of a long day is the same for everybody..we have all been there in one way or another. Do take care Ben.”

Good Morning Britain’s Emily Knight wrote: “I’ve been known to yawn Yawning face a tiny bit on the early shift while waiting for GMB to opt to the regions! You’re not alone.”