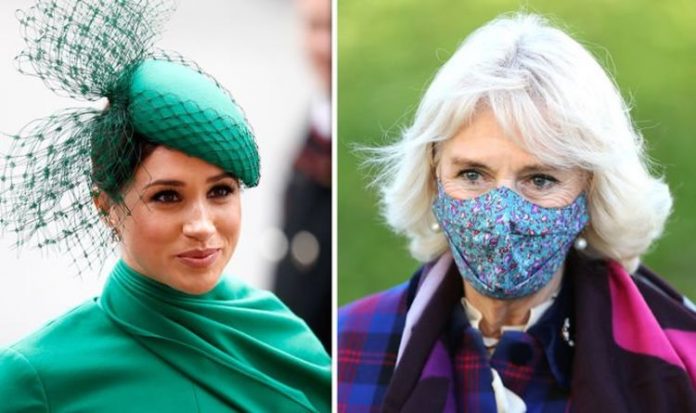 Camilla thanks Strictly Come Dancing for ‘uplifting the nation’

Camilla, Duchess of Cornwall, has an intriguing relationship with Meghan, Duchess of Sussex. The two are said to get along well and it is perhaps unsurprising, given Camilla may well have had more sympathy than most for the controversy Meghan found herself in when she married into the Royal Family. Camilla, afterall, married Prince Charles in 2005 as a divorcee in front of a watching public who knew her as the woman accused by the late Princess Diana of breaking up Charles’ marriage.

Meghan, also a divorcee when she married Prince Harry in 2018, had to put up with a cloud of controversy thanks to her father, Thomas.

In the days prior to Meghan and Harry’s nuptials, it emerged that Thomas had staged paparazzi photographs.

He later admitted he lied to Harry about staging the photos.

To make matters worse, Thomas had two heart attacks as media scrutiny mounted up before his daughter’s wedding, meaning he wasn’t well enough to attend.

Camilla talking to NHS workers during the pandemic (Image: GETTY)

This left Meghan in the unenviable position of having to deal with the anguish and worry about her father’s health on her wedding day.

It also meant he could not attend the ceremony, nor could he take her down the aisle and give her away as per tradition.

Charles stepped in to give Meghan away, earning plaudits in the process, and the day went by without a hitch.

But this did not stop Camilla reflecting on the chaos that had preceded the wedding.

Speaking just days later, she said: “It was such a lovely day. Just everything went right.

“We all wondered whatever would happen next and then everything went right.

“The only thing is that we are all losing our voices now.”

The Duchess of Cornwall appeared relieved it had gone by without a hitch, according to royal correspondent Rebecca English.

Camilla added: “It’s nice to have something that is uplifting rather than depressing.

“Everything was just perfect, including the weather, which couldn’t have been better.

“It was a beautiful day.”

Camilla’s relationship with Meghan is said to have stayed strong even as the Sussexes dramatically left front-line royal life behind in January.

Sources close to Meghan claim the Duchess of Cornwall took her new daughter-in-law for private lunches and offered advice on how to deal with the pressure associated with being a royal.

A friend told the Mail on Sunday: “Much like Meghan, Camilla had experienced a lot of negative press and hostility from courtiers due to her relationship with Charles when he was still married to Diana.

“She was very sensitive to Meghan and provided her with support, advising her to ride out the storm and that it would pass – but ultimately Meghan didn’t listen.”

This sentiment is believed to have endured, though, as Charles helped with the financial burden of Meghan and Harry’s move to North America before they secured lucrative deals with the likes of Netflix and Spotify.

Harry is close with his stepmother, too.

Alongside his brother, Prince William, he had a “naughty” surprise in store for her when she married his father.

Camilla looking on as Meghan gets married (Image: GETTY)

Amazon Prime documentary “The Queen’s Diamond Decades” shows footage from the events of that sunny day in Windsor.

Narrator Patricia Hodge says: “It was a different sort of royal wedding.

“William and Harry welcomed their stepmother into the family.

“Having decorated their car in style, the young prince gave the newlyweds a send-off to remember as they departed for their honeymoon.”

The documentary also showed how Harry cheekily made faces into the window of the Bentley and shouted: “Thanks for coming!”

Friend of Charles and Camilla, William Shawcross, told People Magazine at the time: “They were milling around the crowd, extremely cheerful, looking naughty and having fun decorating that car.”