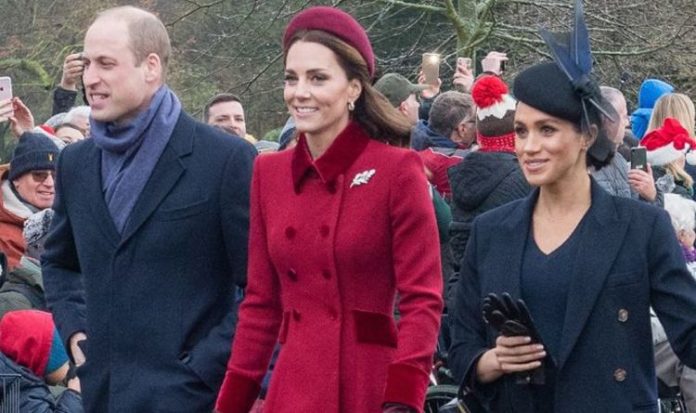 Kate, Duchess of Cambridge, and Prince William could follow down the same path as Meghan Markle, if they chose to do more voiceover work, royal commentators have said. This comes after the royal couple narrated a video re-working ‘Twas the Night Before Christmas’ to celebrate the work of key workers through the pandemic. However, Royal Rota podcast hosts Chris Ship and Lizzie Robinson discussed why there were “inconsistencies” in the reactions towards the Cambridges and Sussexes.

Mr Ship told listeners: “Some people said that they could make money out of doing narration since they did such a good job of it.

“Funny enough it’s something that Meghan’s done before.

“When Meghan was going to narrate stuff for Disney, everyone criticised her.

“When William and Kate narrated this video, they didn’t. Discuss.”

Ms Robinson said: “That is true. I suppose the reason the Cambridges haven’t been criticised is because they were thanking key workers.

“Although Meghan did do hers for charity.

“I guess there were question marks over whether Meghan was using it as a springboard for getting back into acting.

“But they were both done for good causes.”

The video posted to the Kensington Palace Instagram showed scenes from the London Palladium’s charity pantomime.

The Cambridge family had attended the show in the West End hosted by the National Lottery as thanks to key workers and their families for their hard work this year.

It was the first time William and Kate have been seen with all their children in public since Trooping the Colour last June.

The rare outing was also the Cambridges’ first official engagement as a family of five.

It was Prince Louis’ first official one ever.