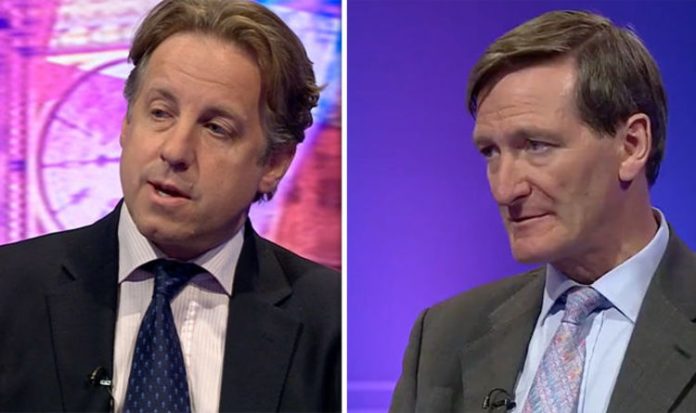 Parliament has been battling over the Chequers deal, as hard-line Brexiteers and Remainers try to force policy through the Chamber.

He said: “I do think this particular negotiation strategy won’t pass the first test of engagement with the EU and I think the EU will just say that isn’t good enough, we want more.”

The supporter of Leave Means Leave thinks Brussels will be rigid in their operations and not give over on compromises.

He added: “I think its unrealistic of us to expect them to change the way that they do things just for us.”

Mr Fysh said the relationship between Britain and the EU has to change for the benefit of both parties.

He continued: “I think it would be much better to have a normal relationship between two regulatory and customs jurisdictions.”

In the same discussion, one Remainer MP described the current mess of negotiations as “the biggest peace time crisis” in memory.

Dominic Grieve, Tory Remain rebel, described the country as in “a terrible hole”.

He said: “I am the first to accept that this is a terrible hole into which this country has got itself.

“I’m a historian by education I’m familiar with national crises, and there is no doubt we’re in the biggest peace-time crisis in our modern history.”

Mr Grieve is one of a handful of Tory MPs who have consistently voted against the Government this week.

He – alongside Nicky Morgan and Anna Soubry among others – has voted against the Prime Minister on issues such as trade.

He described the current situation as “unusual” and pleaded with MPs to use their “best judgement” to try and settle a deal.

He said: “So this is a very unusual state of affairs and we have got to try as Members of Parliament to exercise our best judgement to find a way through that.”