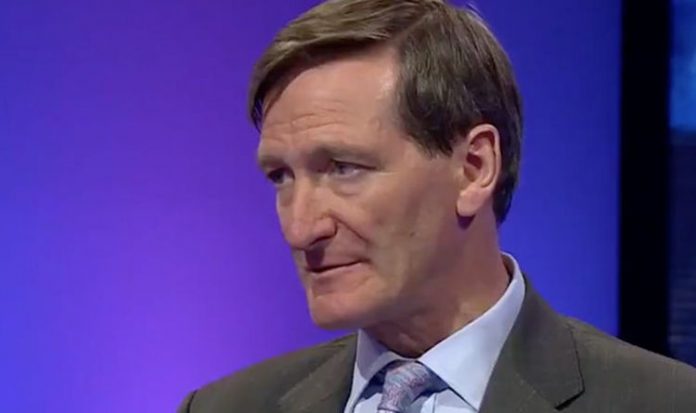 Dominic Grieve, Beaconsfield MP, told BBC Newsnight that in the event of a no deal Brexit, Parliament would “assert its authority”.

He told host Evan Davis: “I am quite sure in my mind that if we got to the point where it was clear there was no deal, there would be a major political crisis.

“I think that in those circumstances Parliament would assert its authority.

“That might mean the break up of the current party system, and that’s something I have to live with although it’s not something I would wish to see happen.”

If the Prime Minister doesn’t settle a deal with the Brussels bloc, Mr Grieve said it could trigger a Government collapse or even a second referendum.

He said: “It would be a major political crisis, and it will either – either the Government will have to change its position, or the Government might fall; that could precipitate a General Election.

“Or it could be a caretaker government being formed.

“It might lead – as Justine Greening has suggested – to having to go back and consult the public about what they really want because I’m the first to accept if we have paralysis, at the end of the day, we can’t disregard the public’s vote in the referendum two years ago.”

The Prime Minister is currently relying on Labour Brexiteers to get her motions passed, as a group of Tory Remain rebels, including Mr Grieve, voted against the Government in favour of a soft Brexit.

Mr Grieve continued by saying there was no way he would accept a Brexit deal which would drop the UK “off a cliff”.

He added: “As I’ve said on many occasions, there are no possibility that I as a Member of Parliament would accept going along with a line which said that we had to accept no deal and drop off the cliff.

“The consequences economically and for our national security would be so serious.”

The Conservative backbencher said he believes a “substantial” number of MPs would rebel to prevent a no deal exit, but people are too afraid to go against party lines for the current votes.

He continued: “The difficulty we’ve got at the moment is that for understandable reasons of loyalty and people wanting to find a way through this.

“I think that there are many in political parties who won’t put their heads above the parapet.

“The evidence suggests to me, that if it comes to the crunch, there would be a substantial majority in Parliament seeking to do something to prevent a no deal Brexit taking place.”